Cyberwar:  How Russian Hackers and Trolls Helped Elect a President: What We Don't, Can't, and Do Know by Kathleen Hall Jamieson 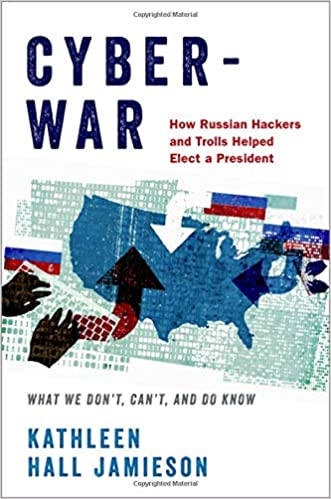 "The question of how Donald Trump won the 2016 election looms over his presidency. In particular, were the 78,000 voters who gave him an Electoral College victory affected by the Russian trolls and hackers? Trump has denied it. So has Vladimir Putin. Others cast the answer as unknowable. In Cyberwar, Kathleen Hall Jamieson marshals the troll posts, unique polling data, analyses of how the press used hacked content, and a synthesis of half a century of media effects literature to argue that, although not certain, it is probable that the Russians helped elect the 45th president of the United States."

A Timeline Showing the Full Scale of Russia’s Unprecedented Interference in the 2016 Election, and Its Aftermath - The New York Times

The Fake News Machine: Inside a Town Gearing up for 2020 - CNN

The Mueller Report's findings in 30 minutes

Russian meddling 'wasn't a single attempt. They're doing it as we sit here': Mueller

Selective Exposure to Misinformation: Evidence from the Consumption of Fake News during the 2016 U.S. Presidential Campaign
Andrew Guess, Brenden Nyhan, and Jason Reifler | (2018)

Though some warnings about online “echo chambers” have been hyperbolic, tendencies toward selective exposure to politically congenial content are likely to extend to misinformation and to be exacerbated by social media platforms. We test this prediction using data on the factually dubious articles known as “fake news.” Using unique data combining survey responses with individual-level web trac histories, we estimate that approximately 1 in 4 Americans visited a fake news website from October 7-November 14, 2016. Trump supporters visited the most fake news web- sites, which were overwhelmingly pro-Trump. However, fake news consumption was heavily concentrated among a small group — almost 6 in 10 visits to fake news web- sites came from the 10% of people with the most conservative online information diets. We also find that Facebook was a key vector of exposure to fake news and that fact-checks of fake news almost never reached its consumers.

In recent years, there has been widespread concern that misinformation on social media is damaging societies and democratic institutions. In response, social media platforms have announced actions to limit the spread of false content. We measure trends in the diffusion of content from 570 fake news websites and 10,240 fake news stories on Facebook and Twitter between January 2015 and July 2018. User interactions with false content rose steadily on both Facebook and Twitter through the end of 2016. Since then, however, interactions with false content have fallen sharply on Facebook while continuing to rise on Twitter, with the ratio of Facebook engagements to Twitter shares decreasing by 60 percent. In comparison, interactions with other news, business, or culture sites have followed similar trends on both platforms. Our results suggest that Facebook’s efforts to limit the diffusion of misinformation after the 2016 election may have had a meaningful impact.

The dynamics and influence of fake news on Twitter during the 2016 US presidential election remains to be clarified. Here, we use a dataset of 171 million tweets in the five months preceding the election day to identify 30 million tweets, from 2.2 million users, which contain a link to news outlets. Based on a classification of news outlets curated by www.opensources.co, we find that 25% of these tweets spread either fake or extremely biased news. We characterize the networks of information flow to find the most influential spreaders of fake and traditional news and use causal modeling to uncover how fake news influenced the presidential election. We find that, while top influencers spreading traditional center and left leaning news largely influence the activity of Clinton supporters, this causality is reversed for the fake news: the activity of Trump supporters influences the dynamics of the top fake news spreaders.

The Tactics and Tropes of the Internet Research Agency

Upon request by the United States Senate Select Committee on Intelligence (SSCI), New Knowledge reviewed an expansive data set of social media posts and metadata provided to SSCI by Facebook, Twitter, and Alphabet, plus a set of related data from additional platforms. The data sets were provided by the three primary platforms to serve as evidence for an investigation into the Internet Research Agency (IRA) influence operations.

Our report quantifies and contextualizes Internet Research Agency (IRA) influence operations targeting American citizens from 2014 through 2017, and articulates the significance
of this long-running and broad influence operation. It includes an overview of Russian influence operations, a collection of summary statistics, and a set of key takeaways that are then discussed in detail later in the document. The document includes links to full data visualizations, hosted online, that permit the reader to explore facets of the IRA-created manipulation ecosystem.

Report of the Senate Committee on Intelligence on Russian Active Measures Campaigns and Interference in the 2016 U.S. Election

From 2017 to 2019, the Committee held hearings, conducted interviews, and reviewed intelligence related to Russian attempts in 2016 to access election infrastructure. The Committee sought to determine the extent of Russian activities, identify the response of the U.S. Government at the state, local, and federal level to the threat, and make  recommendations on how to better prepare for such threats in the future.  1he Committee received testimony from  state election officials, Obama administration officials, and those in the Intelligence Community  and elsewhere in the U.S. Government responsible for evaluating threats to elections.

Polarization, Partisanship and Junk News Consumption on Social Media During the 2018 US Midterm Elections

In the United States, social media platforms serve significant volumes of junk political news and information during important moments in political life—particularly elections. In this data memo, we examine the sources of political news and information that were shared by social media users in the period leading up to the 2018 US midterms, evaluate the sources, and identify the primary audiences for content that is sensational, extremist, conspiratorial or that has other qualities of junk news. Analyzing 2.5 million tweets and 6,986 Facebook pages over a 30-day period, we find that (1) the amount of junk news in circulation over social media is greater than it was during the 2016 US presidential election, with users sharing more junk news than professional news overall, (2) junk news once consumed by President Trump’s support base and the far-right is now being consumed by more mainstream conservative social media users, and that (3) less than five percent of the sources referenced on social media are from public agencies, experts, or the political candidates themselves.