How the National Conversation Begins 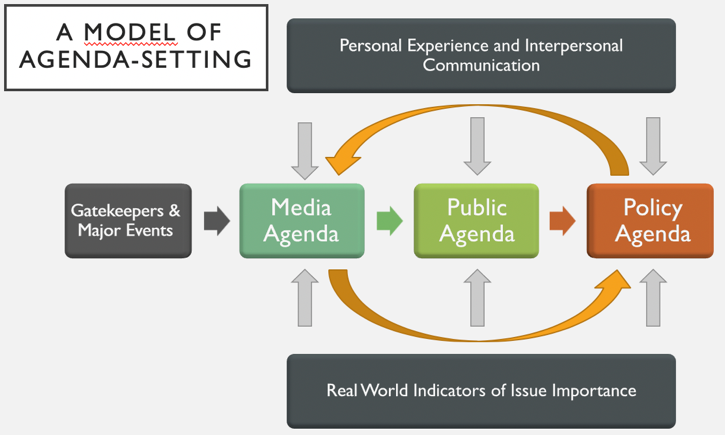 The news media play an important role in determining what information audiences see, or “setting the news agenda.” The professional and ethical standards tacitly followed by journalists, editors, advertisers and news producers ensure the quality and accuracy of reporting. While journalists and other political communicators still play an important role in directing the national conversation, new communication technologies like social media are threatening the position of traditional media in our democracy.

Understanding how the news media affect how individuals process information and how the vitriolic environment of social media polarizes us is critical to explaining how bad actors can subvert ordinary media processes to make people more susceptible to falling for fake news and misinformation.

The sheer volume of daily events and information prohibit the media from relaying the entirety of a day’s news to the public. Thus, important decisions must be made about which issues receive higher priority and dominate the news cycle, and which receive little or no attention at all. Agenda-setting is the idea that the news media don’t tell people what to think, but what to think about.

Media actors do more than relay information and opinion to the public--writers, editors and publishers draw a map for readers that shapes political reality. By setting the agenda, the media communicate to the public what issues are most important and what positions are most relevant. Research shows a strong relationship between emphasis placed on different political issues by the media, and voters’ judgment of the salience and importance of various topics.

Example: During the 2020 presidential debates for the candidates running for the Democratic ticket, the continued references to and questions about health care signals to voters that healthcare is an important issue in the upcoming election in November.

Priming is the process by which activated mental constructs influence how we evaluate information, that is, how recently elicited emotions or thoughts influence our understanding of subsequent information. A stored memory or understanding of a concept can be activated by media messages and serve as an interpretive frame for events. Priming follows from agenda-setting--the news media set the stage for public understanding. Agenda-setting reflects the impact of news coverage on the perceived importance of an issue, but priming refers to the impact of news coverage on the weight assigned to specific issues while making political judgments.

When the media prominently feature an important story, the audience tends to see everything else in terms of that issue. The effects of priming often leads audiences to judge issues in ethical terms. Priming and agenda-setting, taken together, is the idea that the media draws attention to some aspects of political events at the expense of others.

Example: During the presidential debates for the candidates running for the Democratic ticket, the continued references to and questions about health care signals to voters that healthcare is an important issue in the upcoming election, and they will likely base their judgment of a candidate on whether the their healthcare proposal will be an effective solution.

Agenda-setting tells us what to think about, and framing tells us how to think. Framing is the idea that the media create organizing themes or narratives that give meaning to events. The environment and perspective that media provide for a story influence how it is understood by the audience. A frame of interpretation provides a specific set of expectations that is used to make sense of a social situation at a given point in time. This includes selecting and highlighting certain facts of particular events or issues and making connections among them to promote a particular interpretation, evaluation, or solution. Even just a single word can determine the frame of interpretation used by the audience to evaluate credibility or merit of an individual or idea.

Three common types of frames are:

Example: Before interviewing a legislator, if a journalist mentions that the congressperson holds extreme, radical views, the audience may perceive the speaker to be less credible and trustworthy.

Social Media and the Breakdown of Gatekeeping

Social media and the internet have spurred fundamental changes in the way people communicate and interact with information. Newsrooms previously controlled if, when and how a news story was reported. The traditional news media (journalists, editors, TV pundits, etc.) have lost their gatekeeping monopoly of the news and must compete with alternative sources of news and information.

Important decisions that journalists and other media professionals make about the presentation of a story, such as what language is used, which sources are referenced in the story, and which selection of facts are included, are so important because they determine how a reader will experience and understand a story.

Now, news stories may synthesize spontaneously via social media, such as when the president tweets that he is imposing sanctions on a foreign nation, or when a business owner announces they are going out of business via their Facebook page.

The same tactics that are used by journalists to ensure the quality and accuracy of a story can be used by nefarious actors to manipulate readers. Political actors and opinion leaders, and other persuasive demagogues, routinely use priming and framing to present their own version of events.

Social media circumvents traditional media processes all together and limit the media’s ability to set the news agenda, prime audiences, and frame events. This is problematic for multiple reasons:

In the early days of the COVID-19 pandemic, many people were not aware of their state’s shelter-in-place order despite having access to the internet or cable television news. Between March 23 and April 5, 15% of people in each state consistently misunderstood whether they were subject to a shelter-in-place order, and in some places more than half of state residents did not know they were ordered to stay at home, such as in Alabama where 52% of residents didn’t know the states order to stay home.

The Importance of Interpersonal Communication

According to a Pew Research report, 55% of U.S. adults get their news from social media. Almost three-quarters (73%) of Facebook users use the platform as a way to receive news. A driving factor of the increase in social media use for news is that most, if not all, news organizations rely on social media to some extent to promote their stories.

The typical social media user inhabits a digital world that consists of a wide range of connections and a potentially combustible mixture of conflicting opinions, which often results in frustration and annoyance for the user. Social media is a good way to get the news of the day in a packaged, digestible form, but not all social media users are politically engaged. Most people don’t actively seek out news, either online or in print.

What is more important to how average Americans get their news are the informal interpersonal communications networks in their day to day lives. Opinion leaders in an individual’s own social network exert more influence over what that person may believe than do formal political news media. Political leaders and pundits project a picture of the political realm, which the most politically attentive members of society adopt, and which eventually trickles down to the general public via interpersonal communication channels.

Political Polarization is a Defining Feature of American Politics Today

Social media are radically changing these informal channels of interpersonal communication. Facebook, Twitter, Reddit, Instagram and Snapchat, among others, give politically informed and engaged individuals unprecedented ability to express their opinions, disseminate information and draw others into political debate. But these outspoken social media users can create a psychologically polarizing environment for politically uninterested and unengaged users.

Polarization refers to the divergence of political attitudes to ideological extremes.

In the vitriolic environment of social media, users who have no interest in political matters find it increasingly difficult to avoid the polarizing, partisan messages of politically inclined users. More than one-third of social media users are worn out by the amount of political content they encounter online. This new media environment facilitates, promotes and incentivizes politically polarizing communication. Extreme views and provocative commentary are powerful online currency.

Political information carried in elite discourse among our leaders is never just information; it is laden with persuasion, selective facts, and stereotypical frames of reference that “spin” a situation to shed favorable light on chosen interests.

When our elected leaders disagree and when partisanship is injected into a social issue, members of the general public tend to follow leaders who share their general ideological or partisan disposition, with the most politically attentive individuals of the public mirroring most intensely the sharp ideological division of the elite. The potential effect of partisan rhetoric is so powerful that even issues within the direct experience of voters are subject to widely different interpretations.

The democratizing force the internet is believed to be may actually result in less diversity of opinion. The polarization we experience in our politics is reflected online, where people ideologically self-segregate into echo-chambers and exclude opposing viewpoints. According to Pew Research:

For more information on media effects and social media use in the electorate, reference the list of relevant literature below: