Fake news, made-up stories and just pure fiction masquerading as news has a long history in American politics. During periods of conflict, fake news has ebbed and flowed often aimed at influencing opinion and voting behavior. Social media, digital technology, resurgent populist movements and severe polarization in our politics have energized a new wave of fake news designed to confuse, frighten or shape certain behavior in American elections and in our society more generally. 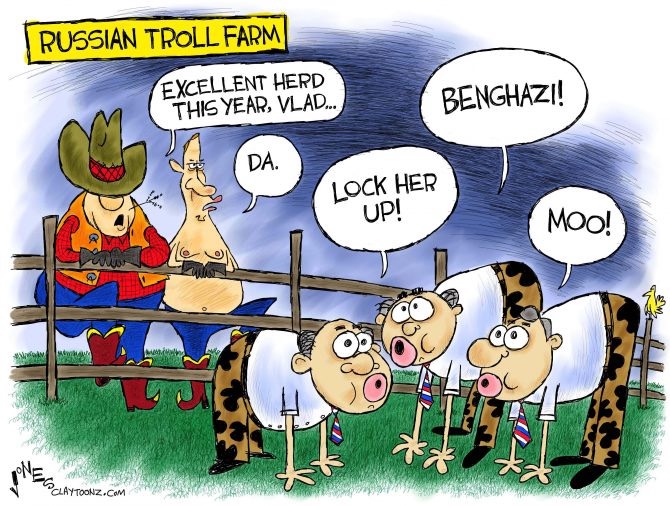 Satire or parody is considered a form of art and is protected by the First Amendment. Satire or parody has no intention to cause harm, but may be written for profit and has the potential to fool readers with invented facts and humor.

The misleading use of information to frame an issue or individual occurs when cropping photos, or selectively including quotes or statistics. “Native” or paid advertising can qualify as misleading content when it is insufficiently identified as sponsored content.

Imposter content uses made-up identities to create rumors or false reports. This includes using the bylines of real journalists on fake news articles, or the deliberate use of an organization's logos, videos or images to make fake news reports appear credible.

Fabricated content is entirely false content designed to deceive. This can include completely fabricated news websites, as well as doctored photos, videos and statistics.

False connection occurs when headlines, visuals, or captions don't support the content of the news report. The most common form of false connection are clickbait articles.

False context occurs when content is shared with false contextual information or is re-circulated out of its original content.

The masterminds who produce disinformation are often different from the agents who disseminate it. Once a message is distributed, it can be reproduced, repurposed, and redistributed by many different actors with different motivations.

The different forms of propaganda illustrate the different motives of disinformation agents:

Judge An Argument For Yourself

Fake news stories manipulate the presentation of facts in order to elicit emotional reactions or cause readers to rely on faulty, biased thought processes. Individual media users are the first line of defense against fake news. The ability to recognize the logical structure of an argument can help media users judge the credibility and truth of news stories.

Slippery slope or casual chain fallacies are arguments that assert a conclusion based on faulty casual evidence. Slippery slope arguments conclude that if “A” happens, then eventually, through incremental steps, “B” and “C” will happen, too. So, if we don’t want “C” to occur, we must prevent “A” from occurring. These fallacies usually suggest unlikely or ludicrous outcomes without much evidence.

Circular arguments simply restate the argument in question rather than providing evidence to support its validity.

Ad hominem attacks are levied against the character of a person making an argument rather than on the facts presented. Ad hominem attacks focus on personality and other elements than affect popularity or favorability.

Tu Quoque or Appeals to Hypocrisy

Tu quoque or appeals to hypocrisy disregard an argument by pointing out hypocrisy in an opponent. Tu quoque arguments deflect criticism and blame away from oneself by accusing an opponent of the same thing.

Straw man arguments oversimplify an opponent's argument or perspective in order to attack it more easily. People who use straw man arguments usually attribute the worst possible motive to an opponent’s argument. The phrase “straw man” illustrates how an opponent attacks a “hollow” version of a person's real beliefs, which are almost always more complex than given credit for.

Appeals to authority cite irrelevant or false authorities on a subject to mislead audiences. Misuse of authority can include citing an expert on a subject that is not within their expertise, or assuming the accuracy and credibility of a person based on the assertion they are experts on a subject.

Equivocation refers to the deliberate misuse or a word, phrase, or sentence to confuse or mislead audiences. Equivocation fallacies usually occur when euphemisms and other replacement words are used to frame situations in a more favorable light.

False dichotomy or either/or fallacies oversimplify an argument by reducing it to only two possible conclusions or choices. Either/or arguments ignore a range of other possibilities and are a manipulative tool designed to polarize audiences, or strong-arm the public into accepting controversial propositions.

The fallacy of sunk costs is the belief that a person should continue with a task because they have already invested time and effort. These arguments do not consider the future costs incurred by continuing the action in question. “Sunk costs” is an economic term for expenses that can no longer be recovered. Sometimes people become too emotionally invested in a project to abandon their efforts despite evidence it would be a fruitless endeavor.

Genetic fallacies are conclusions based on the argument that the origins of a person or idea determine its character, nature, or worth.