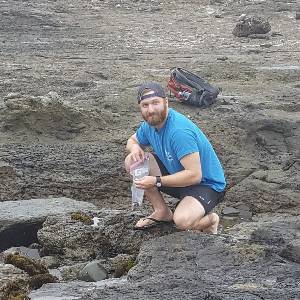 Jacob’s research straddles the fields of archaeology and paleoclimatology, focusing on paleoclimate reconstruction and human-environment relationships in the late Holocene. He has 10 years of archaeological field experience in both Peru and Louisiana, and outside of his paleoclimate work has been the archaeomalacologist for several field projects in Peru. He is also an amateur naturalist and outdoorsman, having grown up in the Louisiana coastal region. Jacob’s dissertation topic focuses on developing Donax obesulus, a short-lived surf clam, as a climate archive in northern coastal Peru. This research has been funded by the National Science Foundation Paleo Perspectives on Climate Change (P2C2) program (award #1805702). D. obesulus stable isotopes (specifically δ18O) show promise as a proxy for sea surface temperature and the El Niño-Southern Oscillation (ENSO) based on a modern analog study. By using archaeologically sourced D. obesulus specimens, Jacob plans to fill in spatial and temporal gaps in our knowledge of ENSO and its impacts on the north coast of Peru during the late Holocene. Preliminary results suggest that ENSO was much more variable than expected ~2400 years ago, and may have been comparable to modern ENSO variability. He plans to expand this research into multiple regions of Peru by developing a network of like-minded archaeomalacologists and paleoclimatologists.

Jacob is also interested in proxy development, specifically the use of trace element ratios from short-lived bivalves as proxies for environmental signals. He has been trained in the use of inductively coupled plasma optical emission spectrometry (ICP-OES) for the determination of some of these ratios (Sr/Ca, Mg/Ca, and Ba/Ca) in biogenic carbonates, and has begun research using laser ablation inductively coupled mass spectrometry (LA-ICP-MS) for Li/Ca and Li/Mg as a complementary proxy to oxygen isotopes and Sr/Ca. 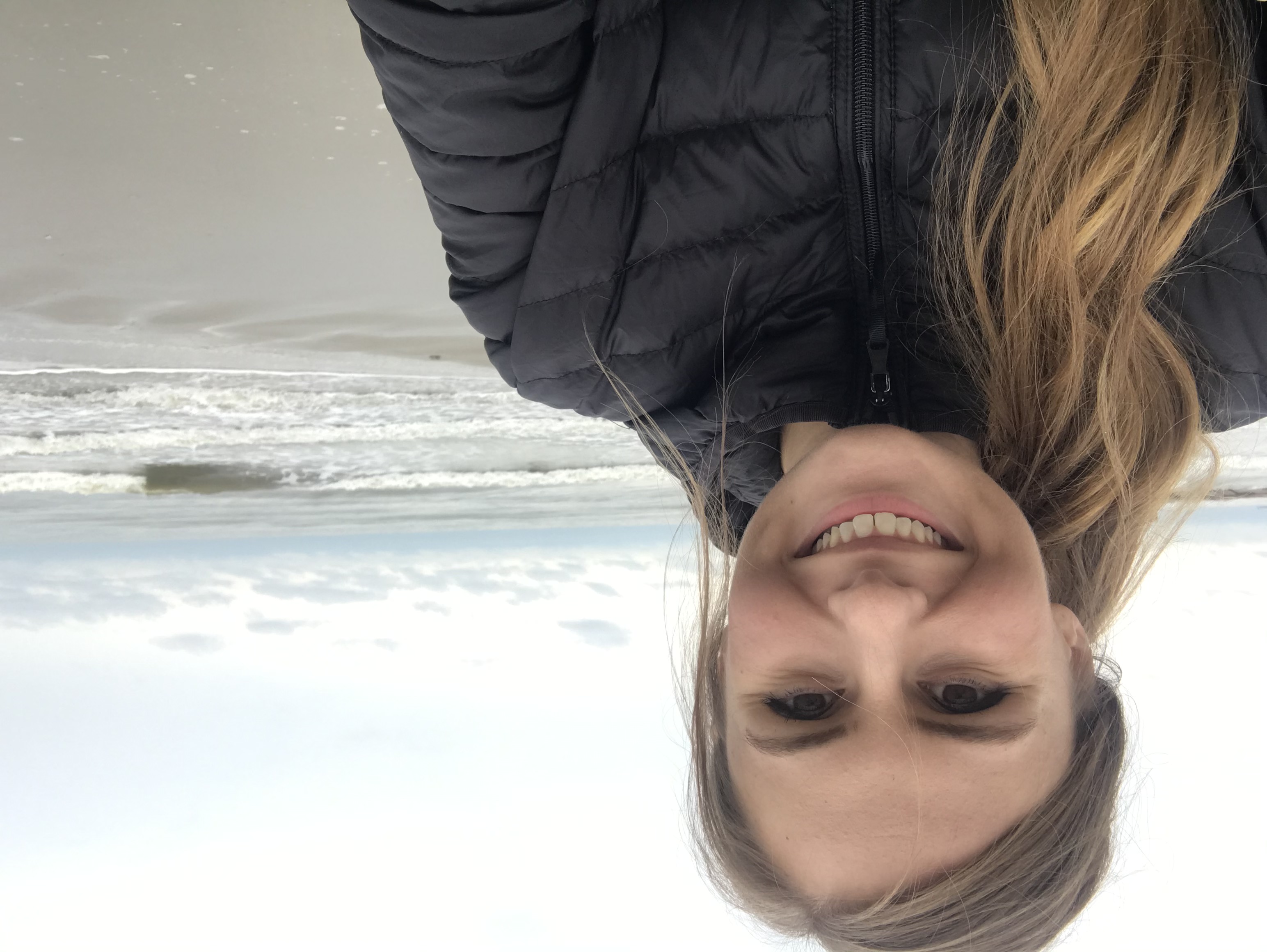 Kendall enjoying a cold day on the beach.

Kendall is a coastal environmental science major, who will graduate in December 2020. Through her involvement with LSU Discover, Kendall learned how to micromill and acidify corals in the summer of 2019 and then learned how to perform geochemical analyses on the PAST Lab's ICP-OES. For her project, she is performing an analysis of three fossil corals from Little Cayman Island dated to the mid Holocene and 1000 years ago. She presented some of her research at two student conferences in the summer of 2020, and will be presenting at the American Geophysical Union meeting in December 2020. Since 2019, Kendall has been awarded two undergraduate research grants and has qualified as a distinguished communicator and distinguished researcher university medalist at LSU. Kendall will continue in the PAST lab at LSU for her Master's degree in 2021. 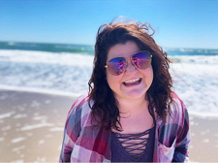 Kylie Palmer is a Ph.D. student in the PAST lab working on coral-based paleoclimate reconstructions with a variety of geochemical and physical proxies. Her interests include coral reefs, sea level rise, hurricanes, and anthropogenic impacts on coral reef ecosystems. Her past research experiences include practicing conservation paleobiology, by analyzing past environments to help predict and properly manage for future environmental change. Kylie is passionate about marine conservation and doing her part to restore coral reef ecosystems. 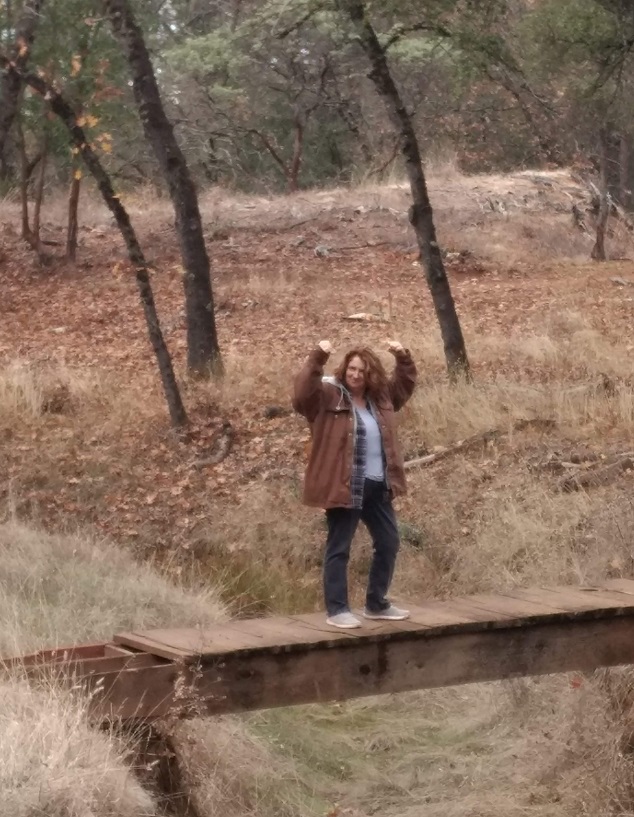 Erika is a master’s student focusing on climatology. Her undergraduate research work spanned topics in geology, geography, and biology, and was awarded several undergraduate research grants. Past projects include profiling the isotopic characteristics of atmospheric river storm systems impacting northern California, examining past fire use by Native Americans as a means of landscape modification in the Sierra Nevada, and investigating the environmental factors influencing mangrove distribution in the Hawaiian Islands. Erika’s passions are storms and marine ecology. Just a few of her far too many research interests are extreme precipitation, ENSO, ocean-atmosphere coupling, paleotempestology, upwelling zones, and coastal-nearshore marine ecosystem interactions. She is an avid proponent of ocean stewardship and firmly believes that if more money and energy were devoted globally to ocean research, the world would be a happier place. 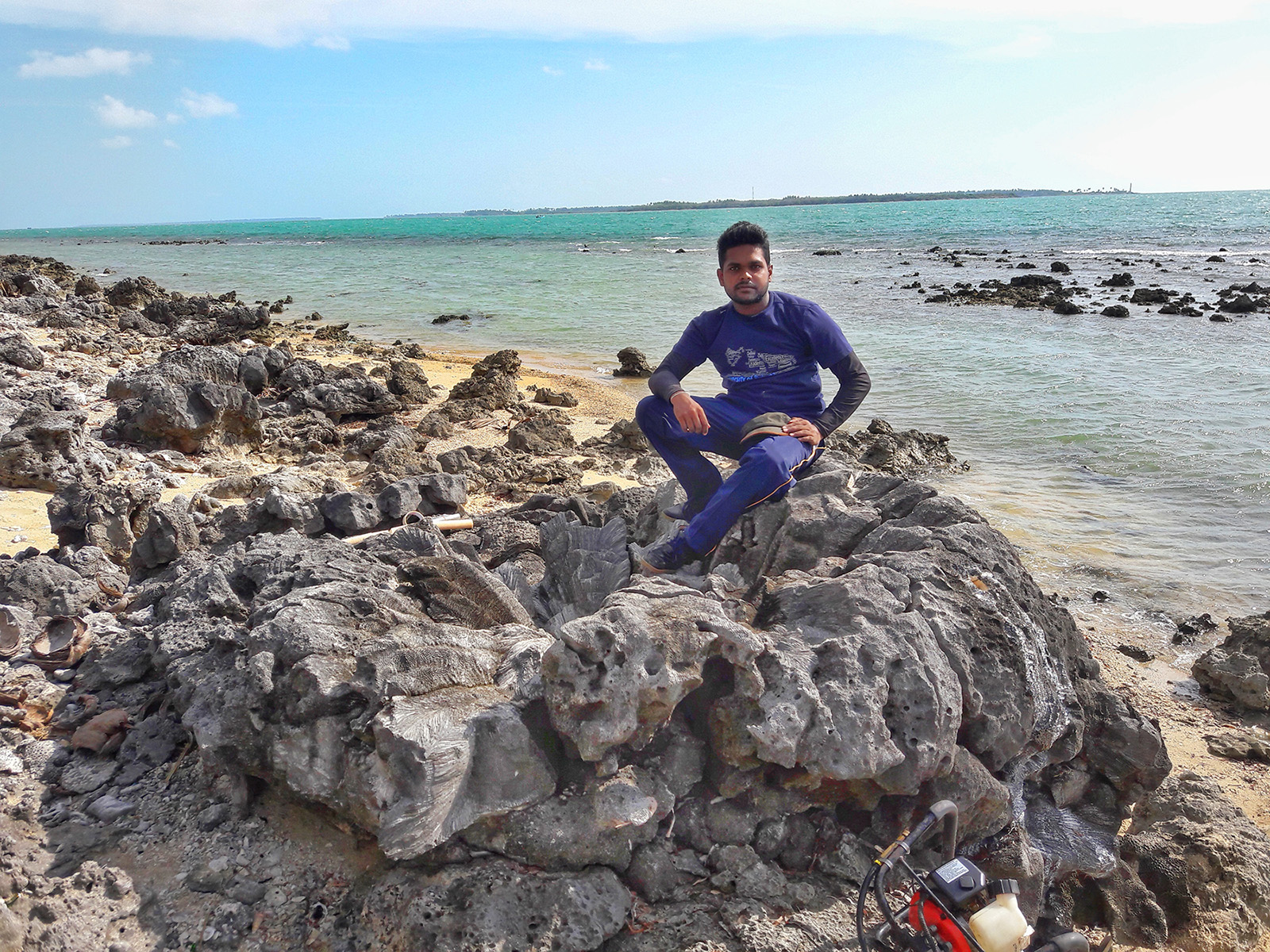 Mudith on a fossil coral in Sri Lanka.

Mudith is a visiting scholar in the PAST lab at LSU. He is from Sri Lanka and is an Erasmus Mundus scholar doing his masters in Marine Environment and Resources under Erasmus+ program in Europe. He has obtained his BSc in Fisheries and Marine Science with an oceanography and marine geology major from University of Ruhuna in Sri Lanka. He has been studying in University of Southampton (UK), University of Bordeaux (France) and University of Basque Country (Spain) throughout his masters program and now doing his master's thesis at LSU. Mudith is working on a paleoclimate/paleoceanography reconstruction using corals with a focus on Ba/Ca variability in the past 100 years in the northwestern Gulf of Mexico. The aim of his research is to understand barium trends in the northern Gulf and possible connections to oil exploration and productivity. He is interested in continuing his research in paleo environmental reconstructions focusing on the shift from the late Holocene to Anthropocene. 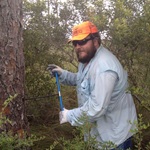 Clay coring a tree in Mississippi.

Clay is a native of Baton Rouge, Louisiana and enjoys working with anything coastal along the Gulf of Mexico coastline. He has a B.S. and a M.S. in Geography from Louisiana State University and completed his doctoral degree in 2020. His master's research identified the occurrence of hurricanes using the dendrochronology of pine trees in Grand Bay National Estuarine Research Reserve, Mississippi. Dendrochronology is the study of tree rings. Trees lay one growth band each year and these growth bands can be affected by a multitude of environmental factors, including precipitation, temperature, disease, etc. Analyzing these tree rings can tell us about the history of environment near this tree. Hurricanes are one of these environmental factors, which cause stress to trees in the form of defoliation from strong winds, and lack of fresh water availability from storm surge. Coastal trees must repair the damage done by hurricanes and thus grow less in the tree trunk the following year. For his dissertation research, Clay analyzed the combine effects of hurricanes, sea-level rise, and saltwater on the ability for these coastal species to adapt to climate change. 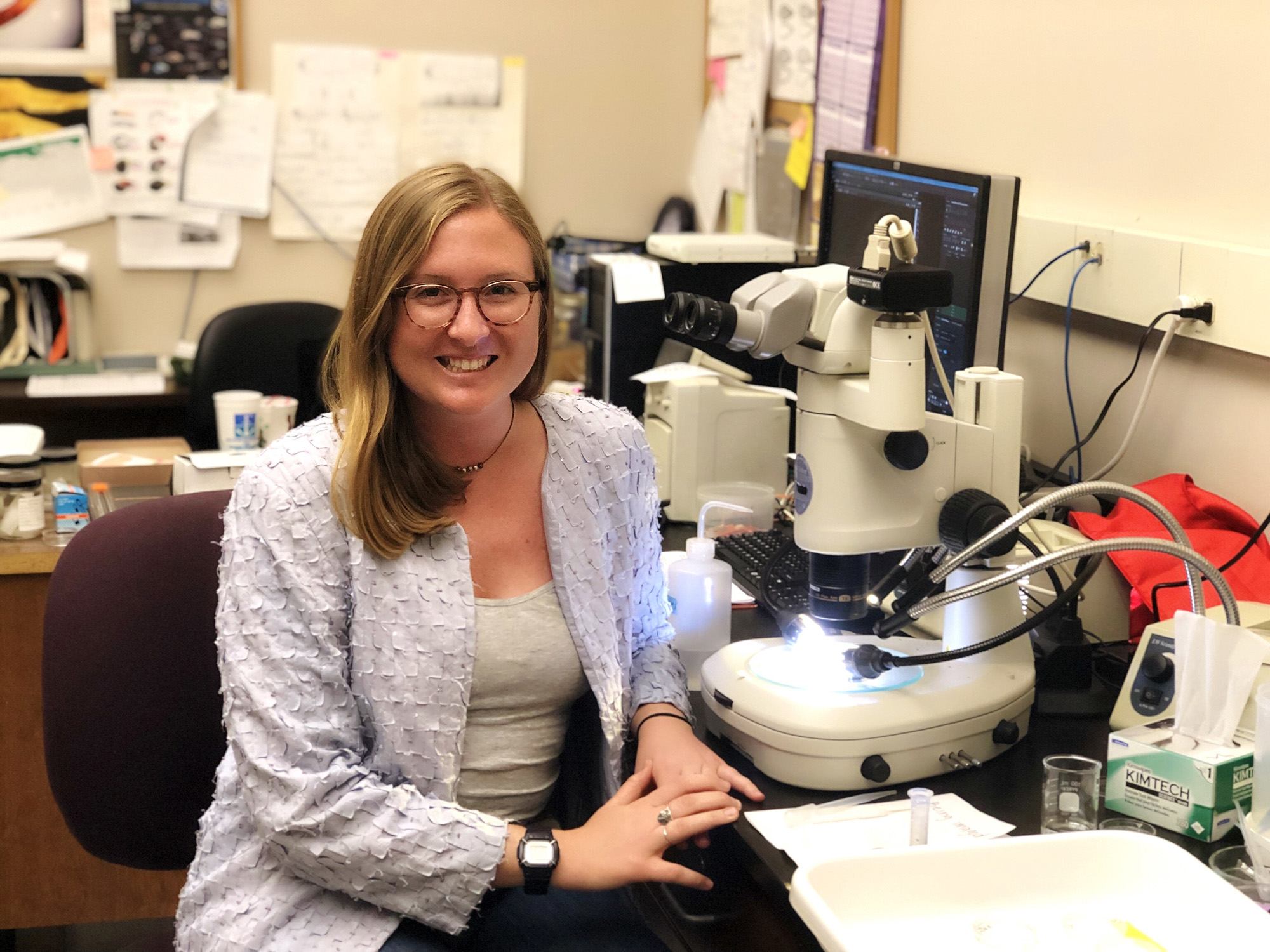 Jessica working in the lab.

Jessica Tolan is a Master's student in Dr. Malinda Sutor's lab and a Graduate Research Assistant in the PAST lab working on processing fossil corals for geochemical analysis. Her interests include plankton ecology, water quality, and trophic web dynamics. Her thesis research was on the temporal and spatial trends of dead copepods in the Northern Gulf of Mexico as it relates to the Deepwater Horizon Oil Spill. Jessica is passionate about all aspects of the ocean and loves learning new fields of marine science. Jessica was also Social Chair in the Coast and Environment Graduate Organization (CEGO) (2018–2019) and the Communications Coordinator for LSU Women in Science (2019). Jessica is scheduled to graduate August 2020. 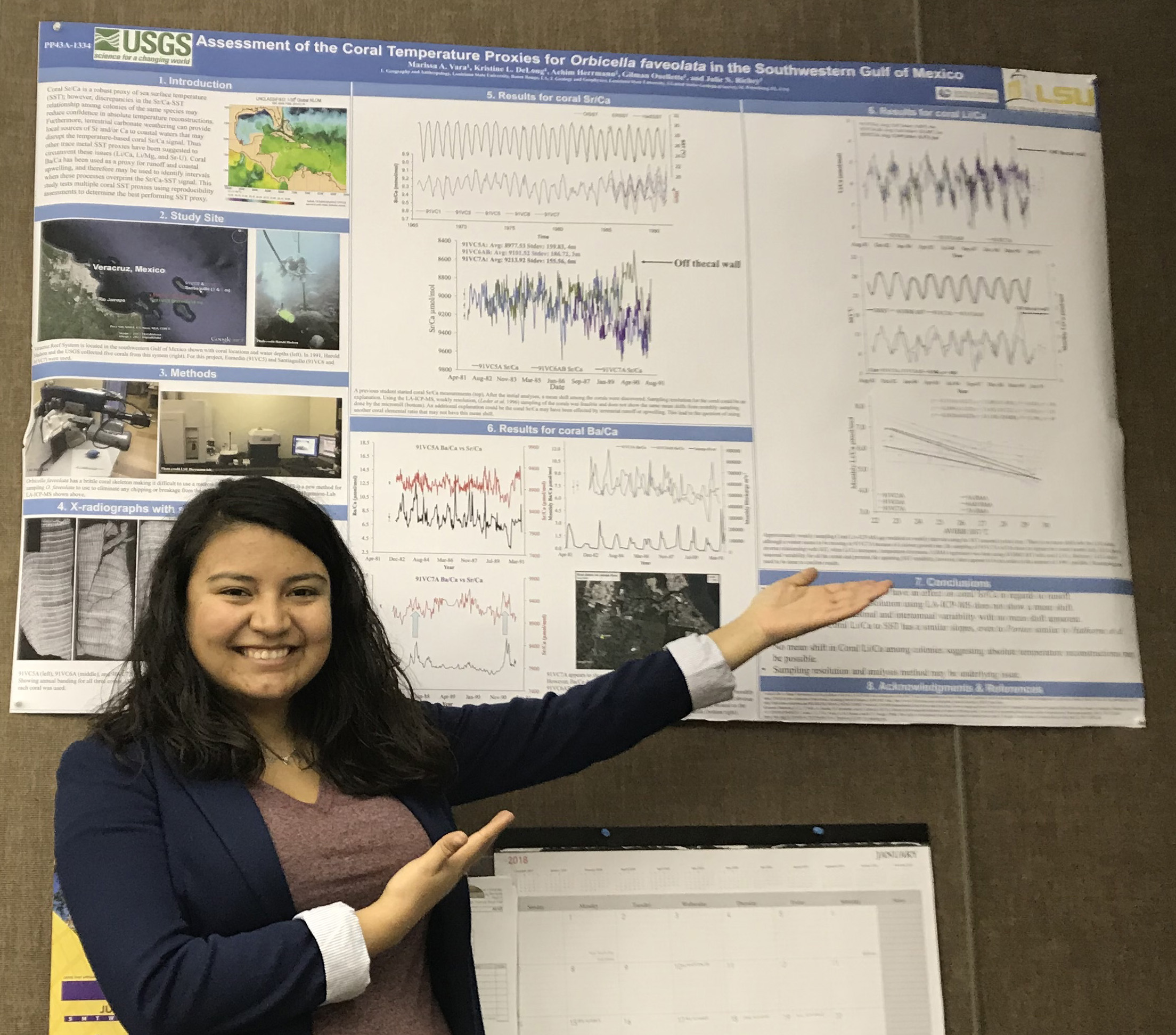 Marissa's reseach with corals explored the use of laser-ablation ICP-MS on four Orbicella faveolata corals from two reefs in Veracruz Mexico and assessed several coral proxies (Sr/Ca, Mg/Ca, Li/Ca, Mg/Li, U/Ca, Sr-U, and Ba/Ca) to see which perfomed better for reconstructing temperature and river runoff (Ba/Ca). She found coral Li/Ca is the best performing SST proxy followed by Mg/Ca, Mg/Li, Sr/Ca, U/Ca, and Sr-U as determined by error of reconstruction (ºC). Marrissa presented her work at the PAGES Open Science meeting in Zaragosa Spain in May 2017, Ocean Sciences meeting in 2016, and American Geophysical Union Meeting in 2018, where she won the best student poster in Paleoceanography and Paleoclimatology.  Marissa enjoys outreach and working with minority students and now works at the National Science Foundation in their geoscience program. 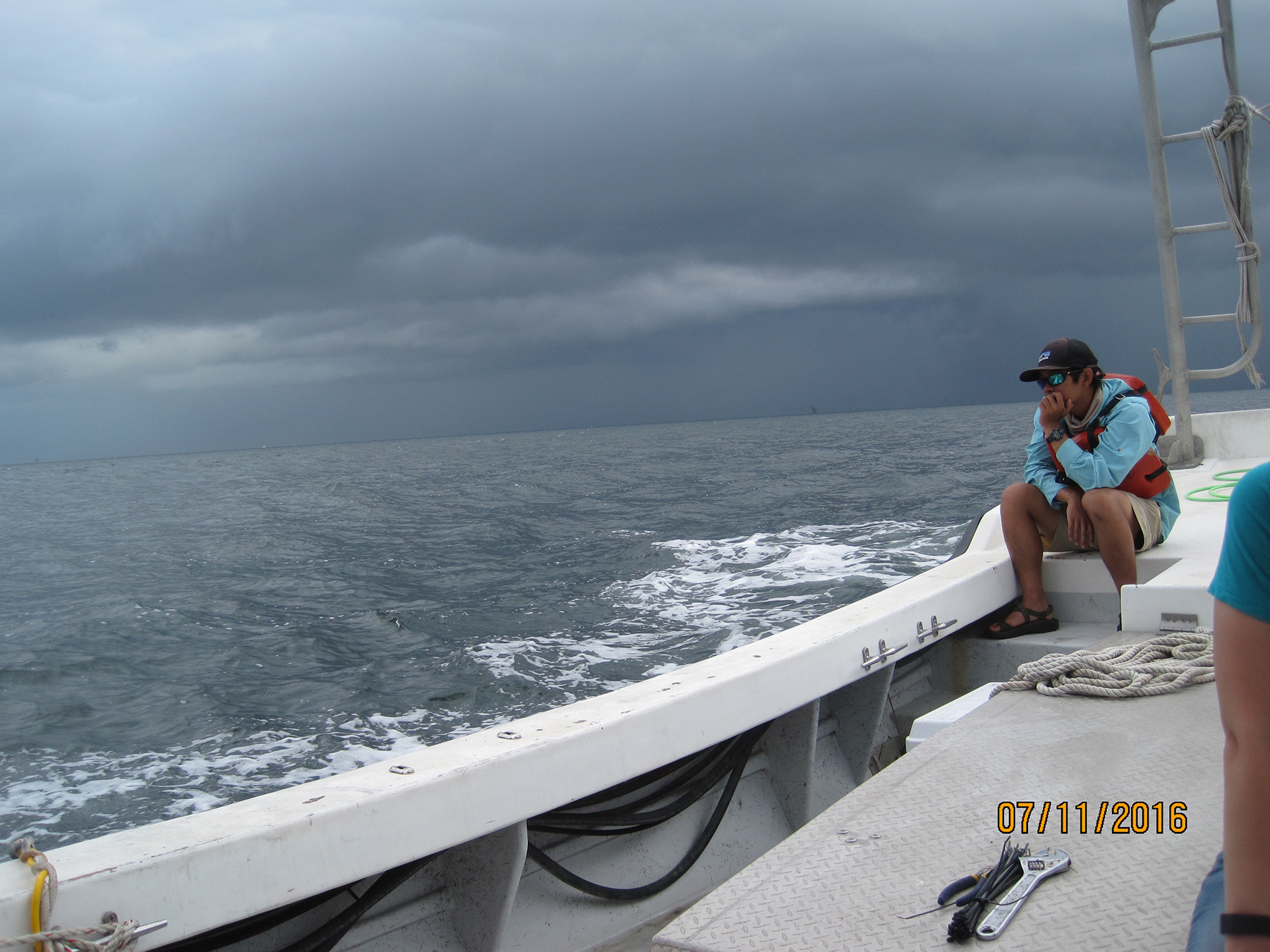 JT relaxing after a day on the RV Coastal Profiler.

JT's research program was part of the BOEM funded Alabama underwater forest project where he examined microfossils in the sediment cores collected at the forest site. JT worked with the team to find the unconformity in the sediment cores between the Holocene Sand and late Pleistocene mud and peats sediments using marine microfossils (mostly benthic foraminfera). JT also found intact seeds and small mite in the peats of the cores. JT worked with other students, Suyapa Gonzalez (Geology) and Jeff Obelcz (Oceanography), to build a regional stratigraphic map of the cores and digital elevation model of the forest site. JT presented his work at the Ocean Sciences meeting in 2016 and American Geophysical Union Meeting in 2017. He is now working in the commercial sector. 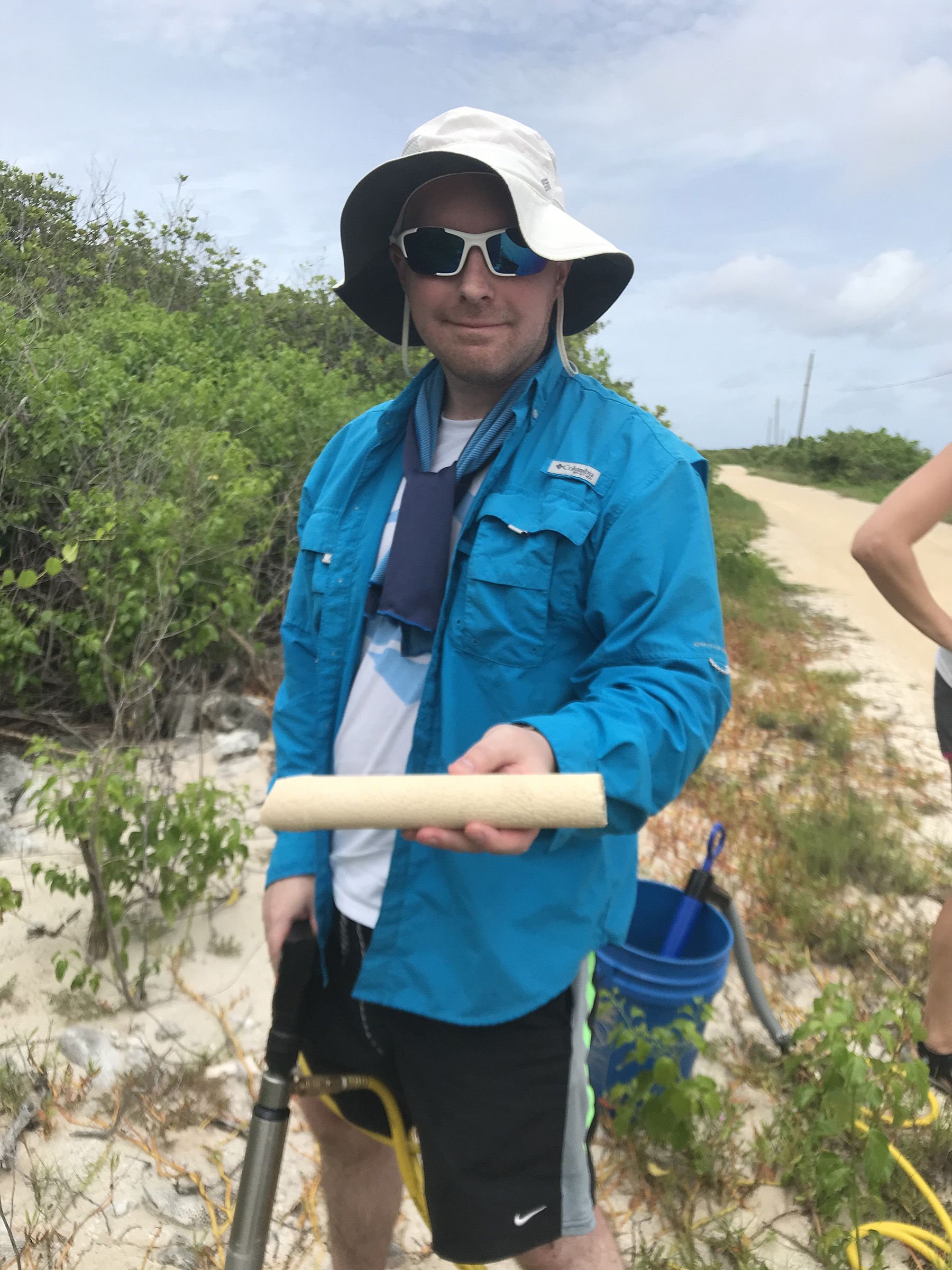 Gil's research focused on reconstructing paleoenvironmental conditions in the Haiti and the Caribbean using multiple proxies including coral Sr/Ca and rare earth elements (REE). He produced a coral-based reconstruction of Central Caribbean sea surface temperatures (SST) for the past 50 years for comparison and complimentary use with previous reconstructions of paleoclimatic and paleoceanic conditions in the region. He also examined SST bias among SST data products, in situ SST observations, and coral-based reconstructions. Gil was a visiting student in the HISPEC lab at National Taiwan University for one semester and served as an instructor for two summers at the Central Caribbean Marine Institute in Little Cayman where he mentored undergraduate researchers and taught a course on coral reef ecology. As a masters student at Western Kentucky University, Gil used the oxygen isotope values recorded in calcite stalagmite samples from Barbados to reconstruct precipitation variability over the past 1,500 years. As an undergraduate at the Pennsylvania State University, Gil studied glacial hydrology and climatology. He enjoys exploring caves and interesting places around the Caribbean, as well as exploring the fine chemical and mineralogical structure of samples in the lab. Gil is now at the National Geospatial Intelligence Agency.