Research | Research on the Geaux

Neurons and glial cells in the cichlid forebrain stained with the Golgi-Cox method show amazing and beautiful structural detail!

Little is known about how animals use information from multiple senses, and how it is used to make behavioral decisions. We are using single neuron recordings in the brain to better understand how A. burtoni processes auditory and visual information.

The auditory neuron at left was recorded from the midbrain torus semicircularis (bottom trace) in response to a 200 Hz sound played through an underwater speaker (top trace). 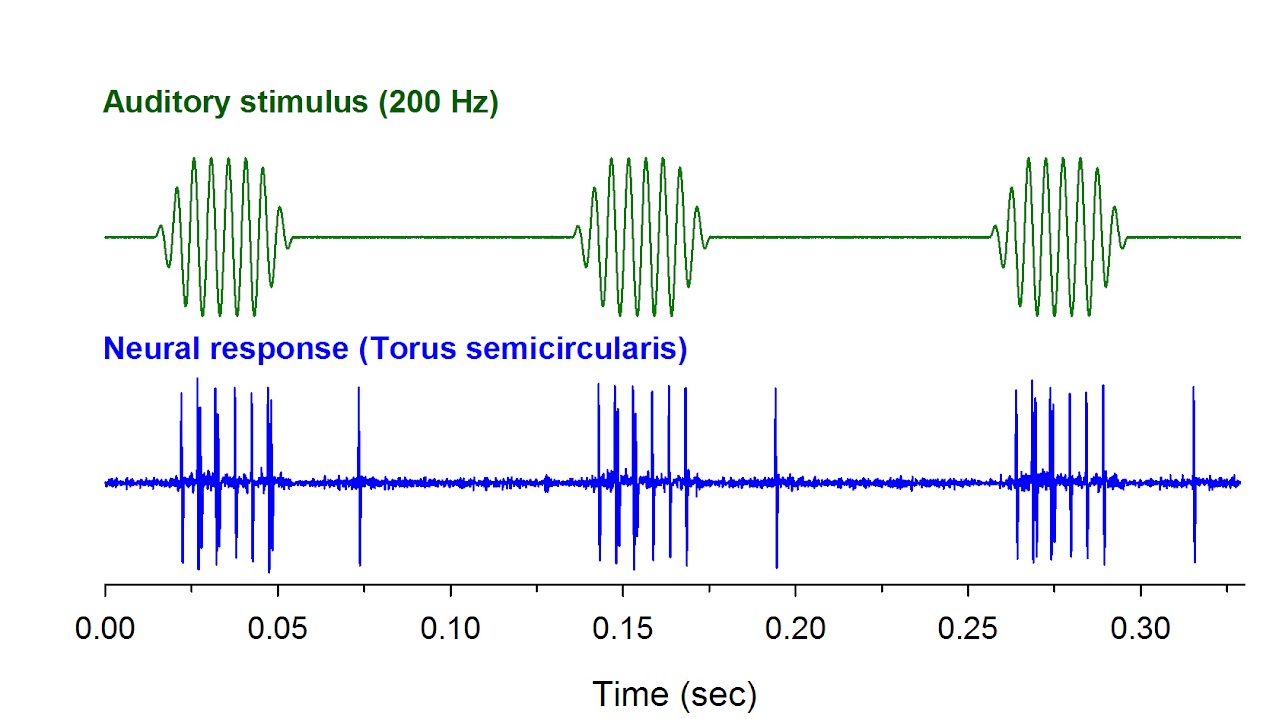 Using the spotted gar Lepisosteus oculatus (a Louisiana native) as a model, we are also studying the evolution of neuropeptide signaling systems. This work is in collaboration with Dr. Brian Grone (UCSF).

Mouthbrooding cichlids are an ideal model to examine the neural mechanisms that regulate feeding, reproduction, and parental care. We are using immunohistochemistry (IHC) and in situ hybridization techniques to study changes in several candidate orexigenic (appetite-stimulating) and anorexigenic (appetite-inhibiting) neurons between gravid and mouthbrooding females. The photos show representative IHC staining for neuropeptide Y (NPY) and agouti-related peptide (AGRP) in the brain of A. burtoni females.

The fluorescent dye DASPEI can be used to label sensory neuromasts (green dots) to characterize the mechanosensory lateral line system (used to detect water movements). Using pharmacological and physical ablation of the lateral line, we are investigating the role of mechanoreception during social interactions.

We are also studying which regions of the brain are involved in processing socially-relevant lateral line information, for the first time in any fish species.

Using a resident-intruder paradigm, we are also studying how fish cope with repeated social defeat. Our goal is to understand the neural correlates controlling the switch between opposing coping strategies (e.g. active and passive). 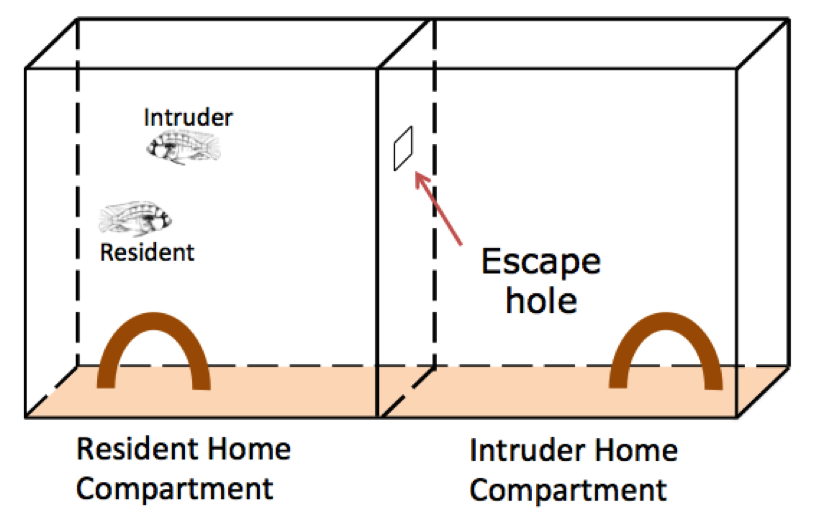 We are exploring whether A. burtoni females alter their chemosensory signaling via urination in a context-dependent manner. Injection of blue dye allows us to visualize urine pulses (arrow) and quantify urination behavior in different social environments. 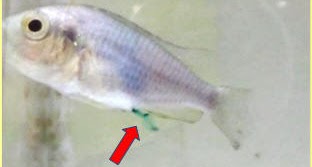 Where in the Brain is Socially-Relevant Chemosensory Information Processed?

The immediate early gene cfos is a marker for neural activation. Using in situ hybridization to label cfos mRNA, we are identifying brain regions that are activated when males are exposed to sexually-relevant chemosensory cues from females. We are particularly interested in regions involved in both olfactory processing and social-decision making. The photo at right shows cfos labeling (purple dots) in neurons of a transverse section through the forebrain of A. burtoni. 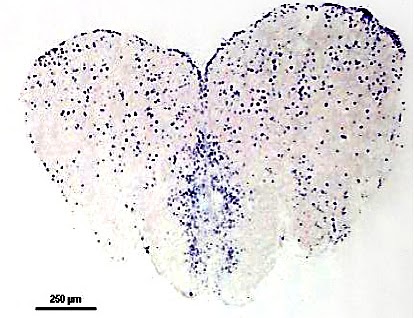 Crypt cells are a recently discovered olfactory receptor neuron (ORN) in the olfactory epithelium of fishes. Unlike ciliated and microvillus ORNs, these cells are not found in higher vertebrates, making them unique to fishes. Crypt cells have been identified in several fish species and are believed to be involved in pheromone detection. Using immunohistochemistry we have identified crypt cells (arrow) in A. burtoni and plan to test the hypothesis that these cells are responsible for detecting sexually-relevant chemosensory signals in this species. 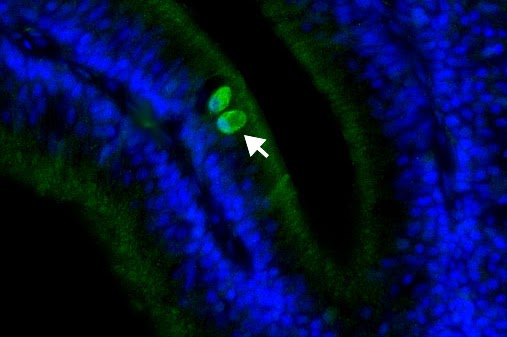 Using fluorescent intensity staining with the vital dye DASPEI of the olfactory epithelium (outlined area) and cfos staining of the olfactory processing regions in the brain, we are testing the impact of cobalt chloride treatment on olfaction. Cobalt chloride treatment is commonly used for lateral line ablation, and it has not previously been studied for its co-morbid impact on chemosensory systems.

Underwater anthropogenic noise has increased dramatically in the last decade, but little is known about how it influences reproduction in fishes. By exposing brooding females ~6 days post spawning, we are testing the impact of noise exposure on developing larvae. Following fry release, we are examining fry condition, mortality, shoaling and startle behaviors, and morphology, and then will examine adult-typical social behaviors and sensory function once the fish reach adulthood. 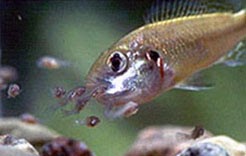 Reproductive-state Plasticity in the Visual System

We know from previous work in the lab that females of different reproductive states have differing auditory and chemosensory capabilities. But do visual capabilities also change with reproductive state? That is, can a female that is ready to spawn potentially see a male (including all of his courtship signals) better? We’re investigating this question using a combination of molecular work, immunohistochemistry, behavior, hormone manipulation, and electroretinograms (ERG). The traces at left are from an ERG of a gravid female. Her response to the light stimulus (white bar) increased after given a hormone injection to induce ovulation.

The reproductive neuropeptide neurokinin B (NKB) is encoded by the tac3a gene. In mammals, NKB is essential for regulating the GnRH system. Despite its widespread expression in the brain, we know little about its potential function outside of the NLT/ARC nucleus. Using double labels for tac3a (blue) and the neural activation marker pS6 (pink), we’re investigating how tac3a cells are activated during different social contexts. When a cell expresses both tac3a and pS6, the cell appears white and represents a tac3a cell that was activated in the conditions under which that animal was collected. 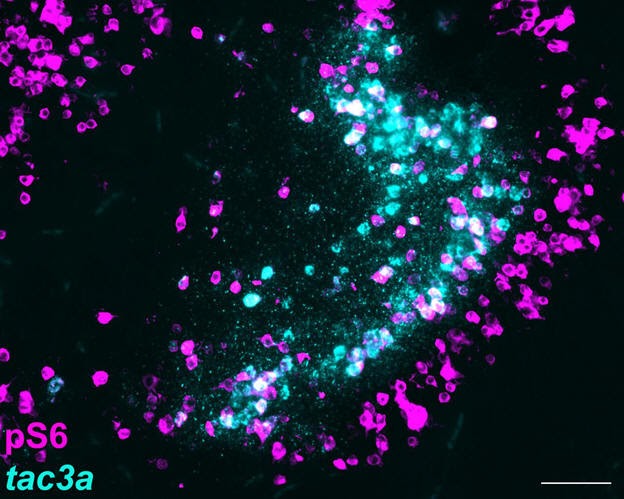