We are ecologists and evolutionary biologists who aim to better understand how the natural world works.  Just like all scientists, curiosity motivates us to characterize patterns and to advance or evaluate scientific hypotheses for the processes (a.k.a. mechanisms) that cause, create, maintain, or modify those patterns.  In these evidence-based pursuits, our attention is especially drawn toward the hierarchical levels of biological organization that range from organisms - through populations and communities - to ecosystems, including the global biosphere.  We primarily study phenomena that intrigue us as naturalists and natural historians, or that concern us as conservation biologists, environmentalists, and engaged global citizens who strive for social and environmental justice, as well as planet-wide sustainability. 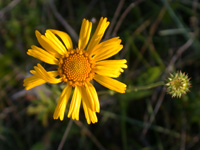 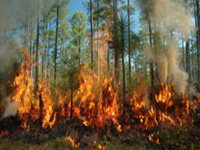 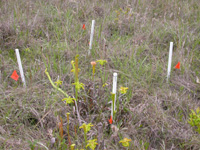 Our basic-science research on community assembly helps contextualize and quantify the roles of dispersal limitation, frequent fire, and species interactions in the high-diversity groundcover (e.g., Gagnon et al. 2012; Harms et al. 2017; Myers & Harms 2009, 2011).  In addition, we found that the bunchgrasses that physically dominate the groundcover tend to be over-dispersed – a spatial-patterning key to understanding these high-diversity communities (Hovanes et al. 2018).

Our fire-ecology research implicates soil heating as a principal driver of groundcover assembly.  The results also suggest that extreme flammability of above-ground organs in many plants from fire-prone ecosystems may be an adaptive mechanism to help protect underground regenerative tissue from lethal heating during fires (e.g., Gagnon et al. 2010, 2015).

We also capitalize on opportunities to apply and translate our science toward conservation and restoration in longleaf ecosystems, especially through educational and management-based outreach.  For example, see my essay for The Longleaf Alliance's quarterly magazine, The Longleaf Leader (Harms 2019); also see our workshop report with recommendations to the Partnership Council of America's Longleaf Restoration Initiative.

View photos of some of our high-diversity groundcover plants in these albums:

Also view my photos posted to iNaturalist (many of which are plants from high-diversity groundcover sites):

We thank Eglin Air Force Base (specifically Jackson Guard), the Girl Scouts of America, the National Science Foundation (grants DEB #0516175, DEB #114408), and The Nature Conservancy for supporting our projects. 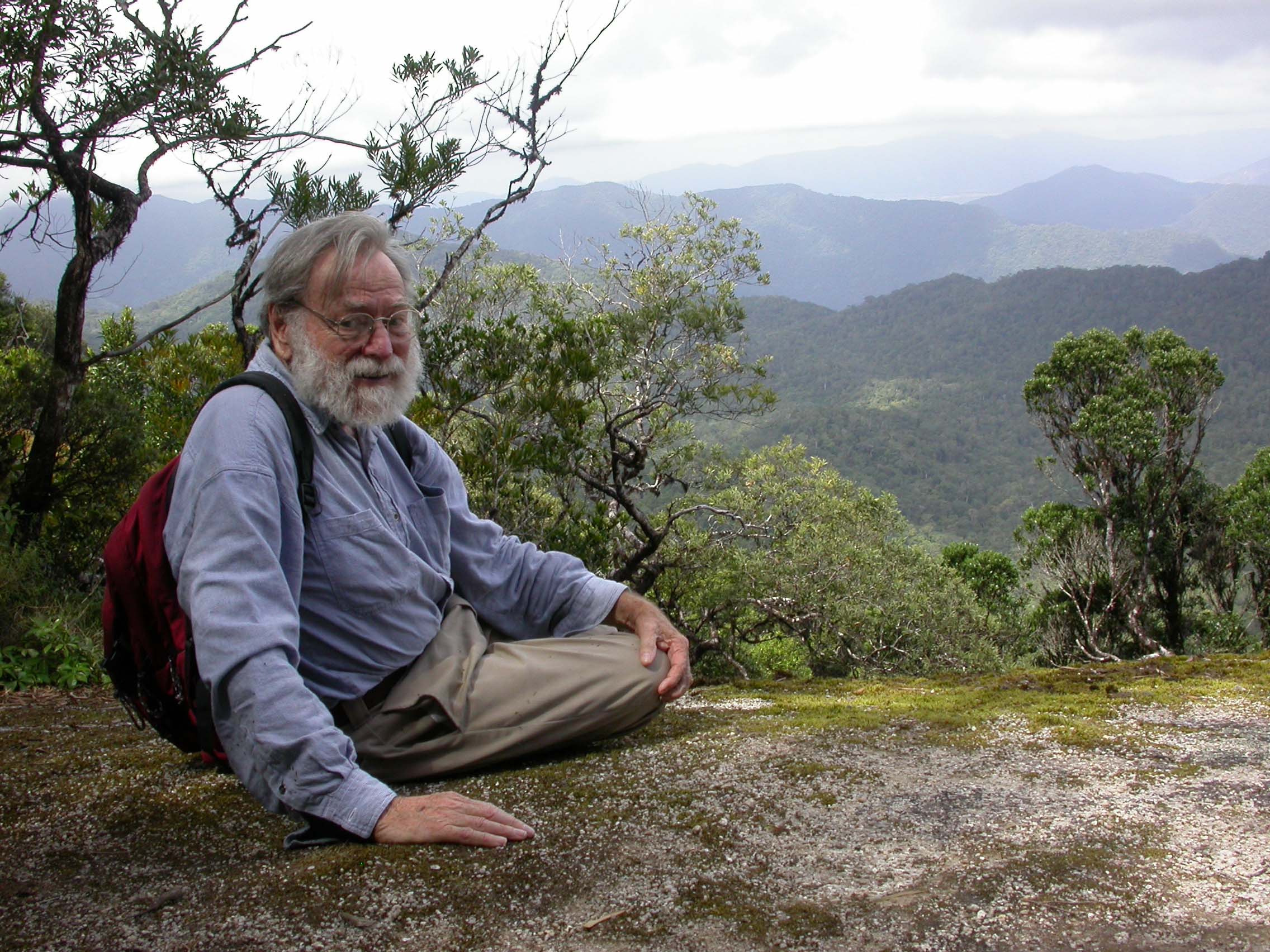 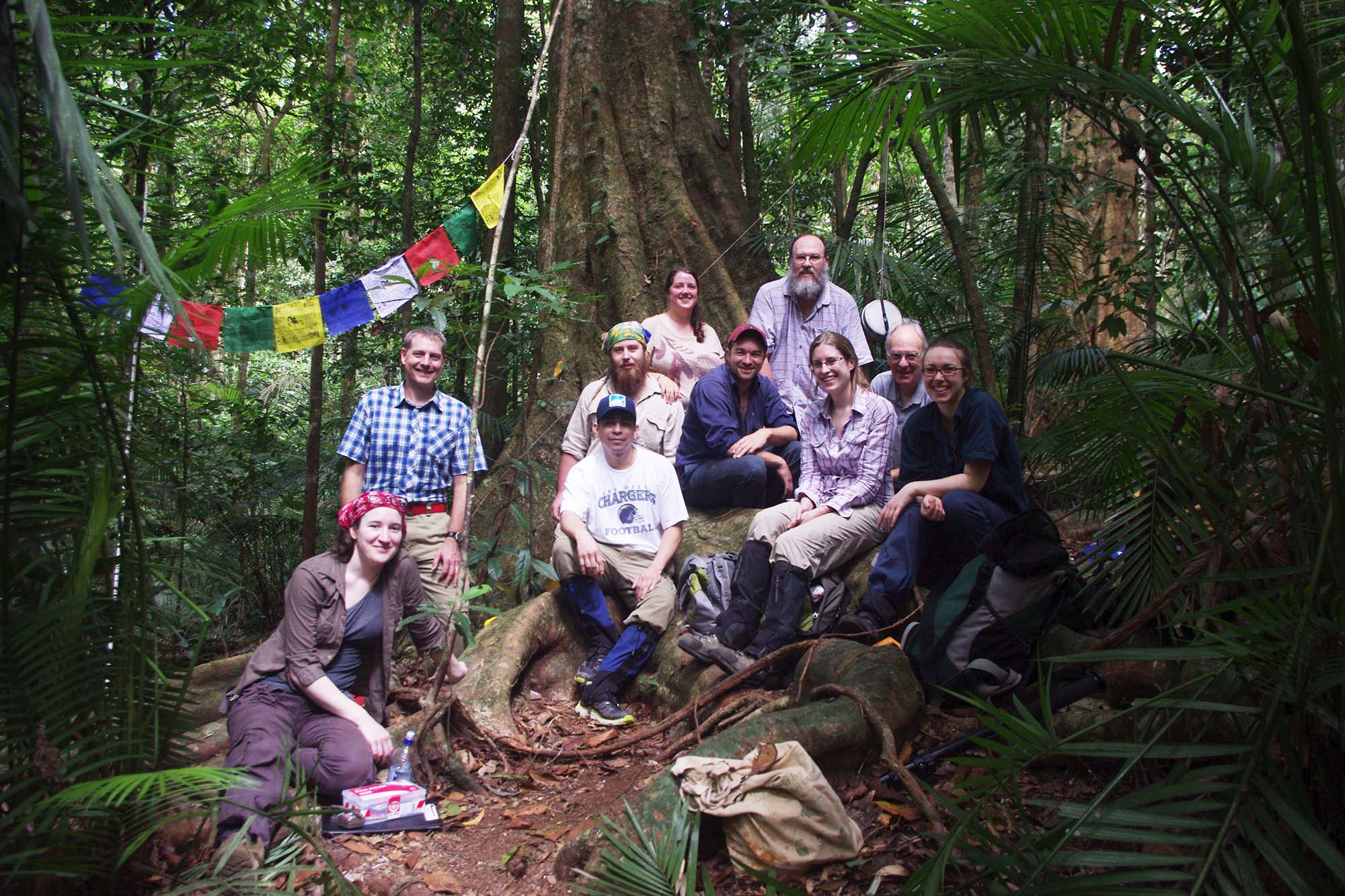 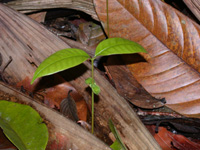 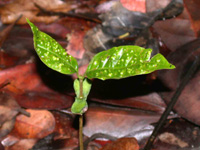 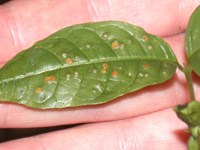 Stemming from their stay-at-home lifestyles, plants tend to interact primarily with their near neighbors.  Accordingly, neighborhood interactions have the potential to shape community assembly (e.g., maintain diversity, organize patterns of alpha- and beta-diversity, etc.).  Our analyses of spatially detailed demographic records – especially for woody species in mapped forests – clearly indicate that non-random, neighborhood-scale, inter-individual interactions generally influence individual-level performance (growth, mortality, recruitment) - often in ways that could foster coexistence, as well as contribute toward the origins and maintenance of biodiversity.

Among other patterns, we have found:

(2) Density- and distance-dependent survival of seedlings and small saplings of a common canopy tree species on BCI (Gilbert et al. 2001); this pattern is also consistent with the Janzen-Connell Hypothesis.

(4) Reduced survival among established trees in conspecific-rich neighborhoods (with relatively consistent patterns among 5 CTFS FDPs in Asia and 2 in the Neotropics; Wills et al. 2006).

(5) Neighborhood influences on individual performance of saplings and established trees that generally - albeit idiosyncratically - taper off with phylogenetic distance separating the focal stem from its neighbors (Wills et al. 2016; Wills et al. 2021), based on our novel Equal-Area Annulus [EAA] point-pattern statistical method, which employs a stems'-traits-swapping randomization or null model, and which we have applied to several CTFS FDPs.

Several other research groups are improving our understanding of these neighborhood spatiotemporal phenomena with detailed work on the mechanisms (e.g., fungal pathogen infection, herbivory, vertebrate seed predation) that cause the patterns.  (See also Jen Wood's work on microbial assemblages in Connell's Davies Creek plot in the previous section on this webpage.)  My own observations suggest that a key culprit causing non-random (possibly both density- and distance-dependent) early-stage mortality in Tetragastris panamensis (Burseraceae) – one of the most common canopy trees on the BCI FDP – is a somewhat host-specific pit-galling homopteran that appears to "rain" down from conspecific adult canopies; this is one of the key mechanisms Janzen imagined when he proposed his version of the Janzen-Connell Hypothesis. 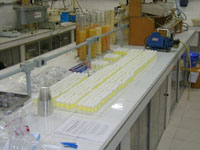 Plant distribution patterns are often biased with respect to environmental variables (e.g., soil chemistry, moisture) or landscape features (e.g., topography).  The nature of the biases, especially the extent to which they differ among speices and their underlying causes, helps sort among alternative mechanisms for the maintenance of species diversity and other emergent properties of community assembly.

Collaborators and I have found distributional biases in several of the Center for Tropical Forect Science (CTFS – a research branch of the Smithsonian Tropical Research Institute [STRI]; now ForestGEO) Forest Dynamics Plots (FDPs).  To assess patterns of association between mapped stems and delineated habitats, I developed the novel Torus-Translation point-pattern statistical method - which employs a toroidal randomization or null model.  We introduced the Torus-Translation Test using data from the Barro Colorado Island (BCI), Republic of Panama FDP (Harms et al. 2001).  Collaborators and I also found distributional biases with respect to topography in the Korup, Cameroon FDP (Chuyong et al. 2011) and the Sinharaja, Sri Lanka FDP (Gunatilleke et al. 2006).  In similar studies, we found biased distributions with respect to soil types among lianas in Sabah, Malaysia (DeWalt et al. 2006) and with respect to soil and topographic variables among trees in the Brazilian Amazon (Laurance et al. 2010).

We thank the National Science Foundation (grants DEB #0211004, OISE #0314581) and the Smithsonian Tropical Research Institute for supporting our initial soil and hydrology collaborative effort, including our soil-sampling, soil-analysis, and data-analysis training workshops in Panama, which expanded sampling and assessments to additional sites within the CTFS network and beyond. 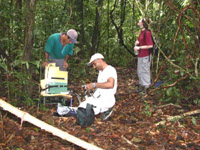 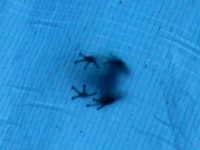 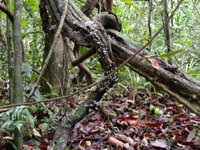 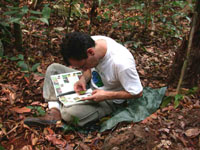 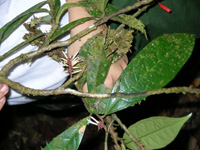 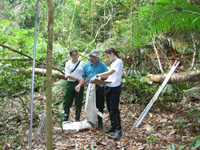 Alexandre "Ale" Adalardo de Oliveira (Universidade de São Paulo, Brazil) and I spear-headed an effort to better understand forest diversity and dynamics in intact forests of the central Amazon Basin by adding a new node (near Manaus, Brazil) to the network of Forest Dynamics Plots (FDPs) coordinated by the Center for Tropical Forest Science (CTFS – a research branch of the Smithsonian Tropical Research Institute [STRI]; now ForestGEO).  We set up a 49-ha FDP in which all free-standing woody stems ≥ 1-cm diameter are mapped, measured, identified to species (of which there are more than 1000), and uniquely tagged for future re-measurements.  Alberto "Beto" Vicentini (Instituto Nacional de Pesquisas da Amazônia) and Ale are now managing and overseeing the project.  Stand data from the plot are being used in a variety of global comparisons among forests (e.g., Réjou-Méchain et al. 2014).  We thank the Brazilian Government, CTFS, the Louisiana Board of Regents, and the Richard & Rhoda Goldman Fund for supporting our project.

In a separate, but coordinated endeavor, I collaborated with Bill & Sue Laurance (James Cook University, Cairns, Australia) and the Biological Dynamics of Forest Fragments Project (BDFFP) in Brazil to better understand changes that occur in Amazonian forests once they have become fragmented (e.g., Laurance et al. 2006).  With funding from the National Science Foundation (grant DEB #0614044), we conducted the first comprehensive census of sapling recruits (1 to 10-cm diameter) in subplots within the 1-ha phytodemographics plots that are strategically located in fragments and associated continuous forests across the BDFFP landscape. 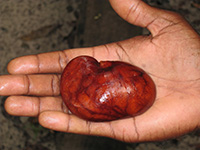 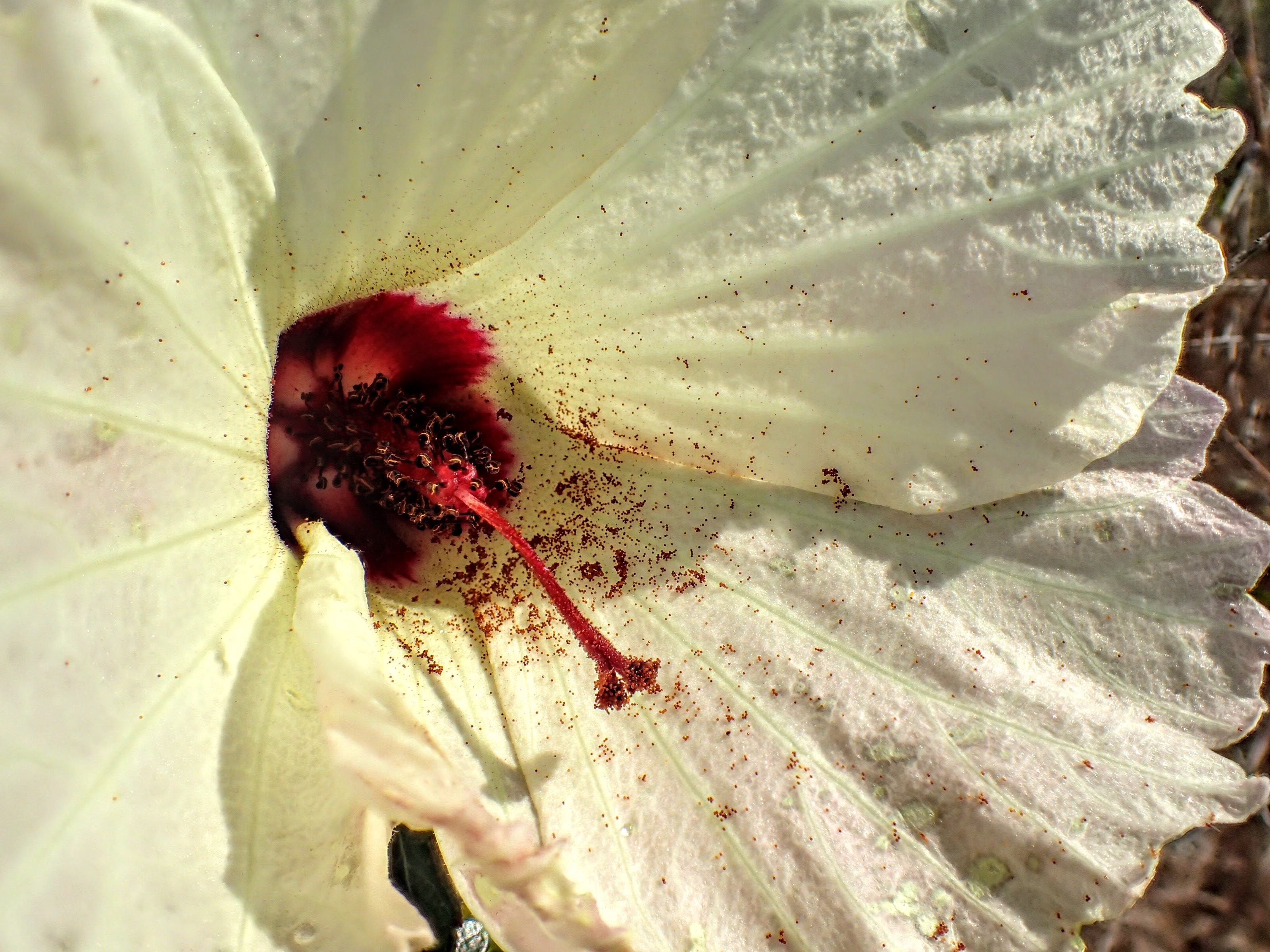 Unusual organismal traits beg for ultimate explanations, i.e., why (in an evolutionary sense) do they exist?  Such explanations require understanding the ecological consequences of the traits for the organisms that possess them.  In the first section on this webpage, I gave the example of plants with highly flammable tissues that thrive in fire-frequented ecosystems.  In subsequent sections, I give two further examples:  "trash basket" architecture for nutrient acquisition in a tropical montane treelet and water calyces for floral defense in a tropical lowland herbaceous plant.

My earliest contributions - with Jim Dalling (University of Illinois) - toward better understanding adaptive traits in plants concerned the importance of resprouting to the recruitment ecology and life-history evolution of large-seeded trees and lianas (e.g., Dalling et al. 1997; Dalling & Harms 1999; Harms et al. 1997; Harms & Dalling 1997).  In the process of working with big seeds, I discovered a new species of clearwing moth (Carmenta foraseminis [Sesiidae]), whose larvae tunnel through the large seeds of Gustavia superba (Lecythidaceae; Harms & Aiello 1995).

Many adaptive or aesthetic plant traits influence the animals with which they interact.  Seed dispersal, herbivory, pollination, etc. are all shaped by evolution, sometimes co-evolution (reciprocal evolution of each partner in response to the other), as well as learning and cultural transmission among the animal interactors.  I recently became interested in the extent to which contrasting pollen on petals in some plants might influence the behavior of potential pollinators (Harms 2020). 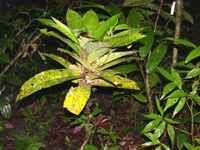 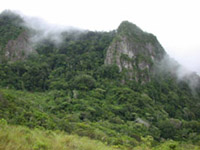 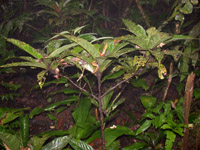 Quadrella antonensis (formerly Capparis antonensis [Capparaceae]) is an unusual montane cloudforest treelet, endemic to the Republic of Panama.  At our study site in Altos de Campana National Park, individuals sacrifice light-capture efficiency to obtain nutrients through aboveground adventitious roots that access decomposing leaf litter held in the "trash baskets" formed from the plant's own closely-spaced leaves (Harms, Dalling & Sánchez de Stapf 2020 - a Flora Obscura contribution to The New Phytologist Trust's Plants, People, Planet; enjoy the brief YouTube video summary).  In our article we compare and contrast litter trapping with botanical carnivory and certain types of myrmecophily as alternative nutrient-acquisition strategies.  Jim Dalling (University of Illinois) and I worked on the basic litter-trapping biology; María Sánchez de Stapf (Universidad de Panamá) collaborated with us and completed a master's thesis by conducting a litter-removal experiment (which empirically demonstrated the performance advantage to these plants of trapping litter); and Bob Pearcy (University of California at Davis) contributed toward understanding the plant's nutrient uptake and self-shading.  We thank the Smithsonian Tropical Research Institute for supporting this project. 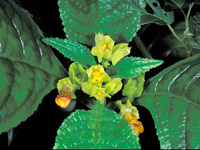 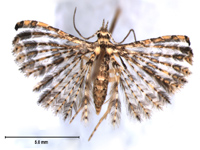 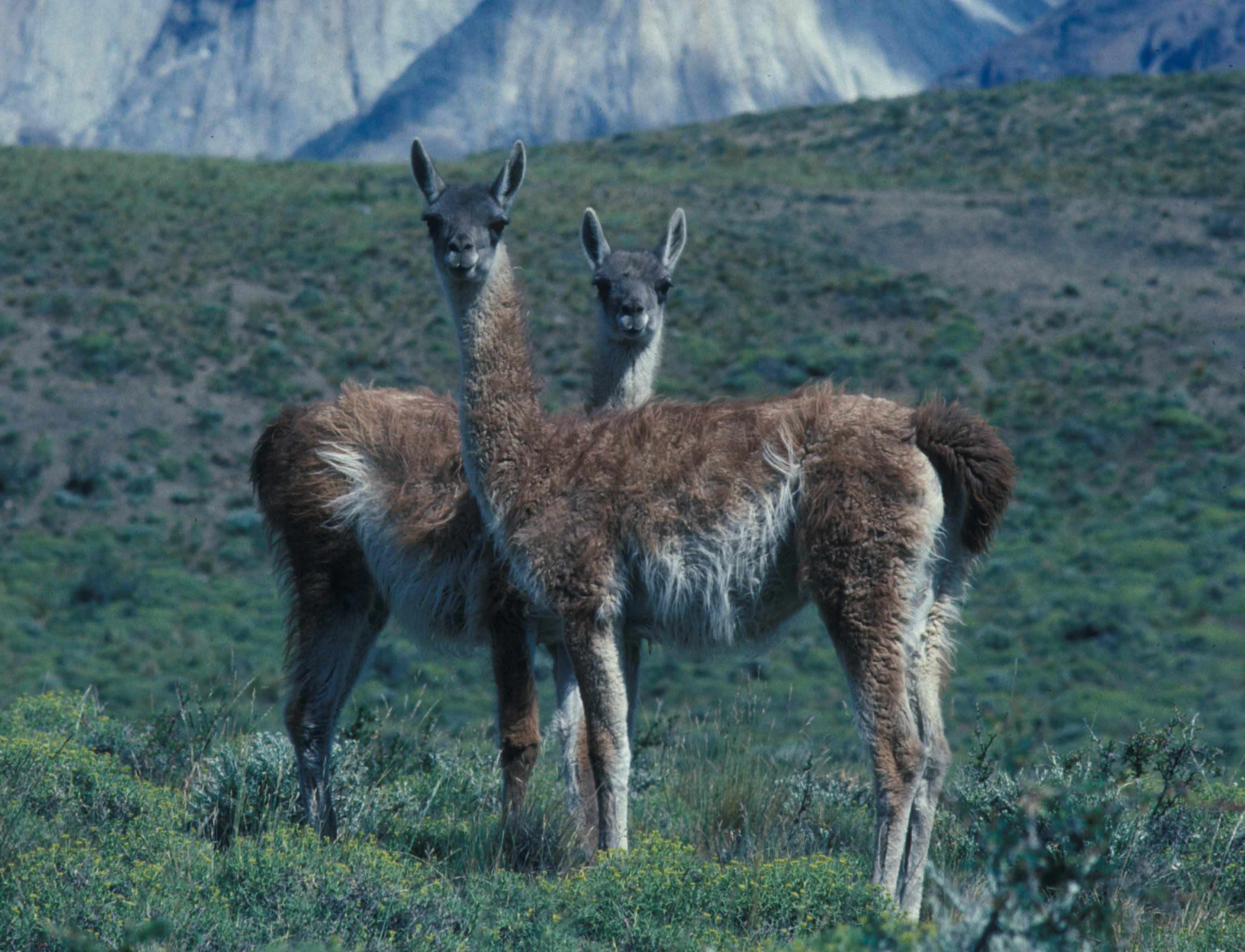 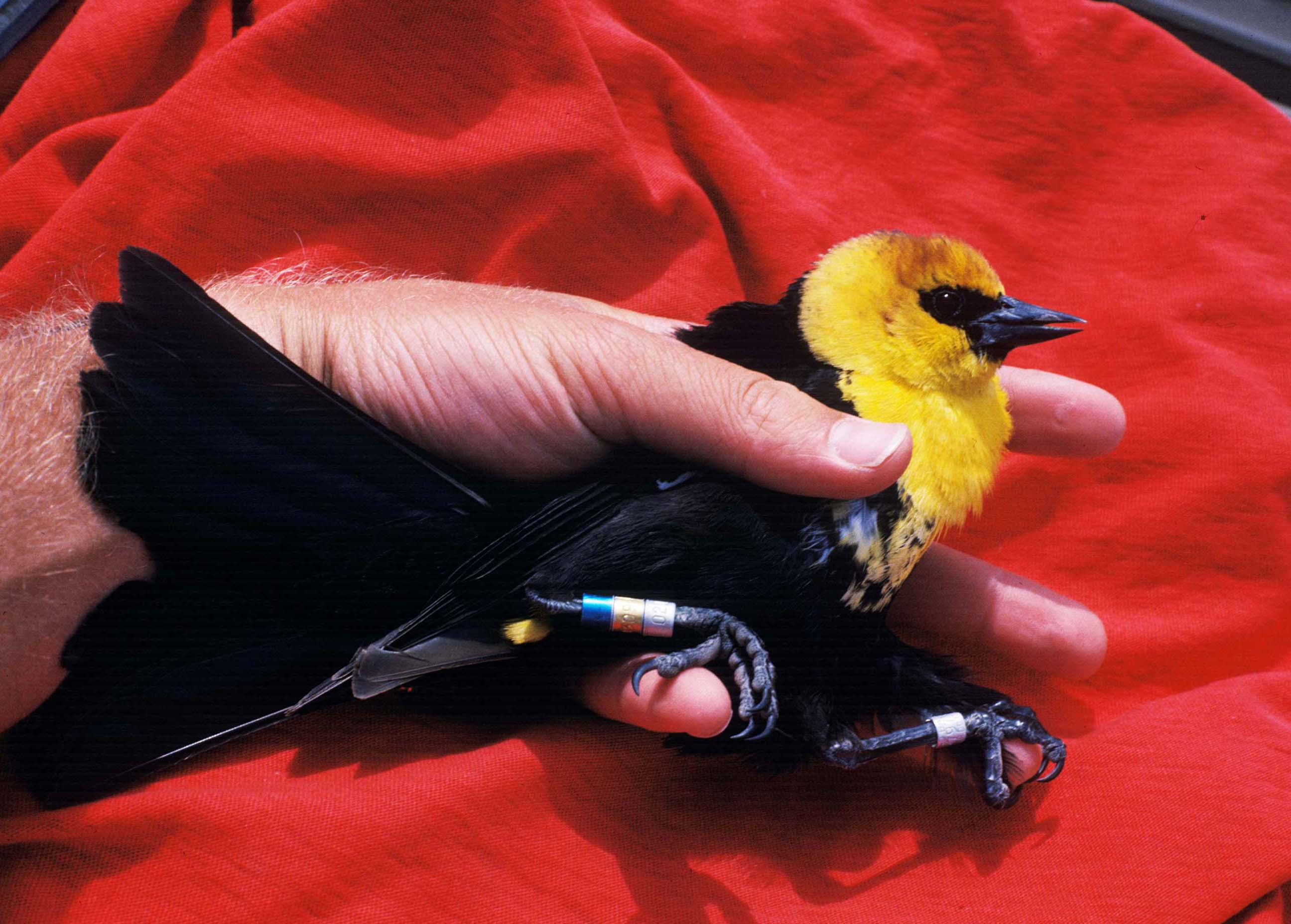 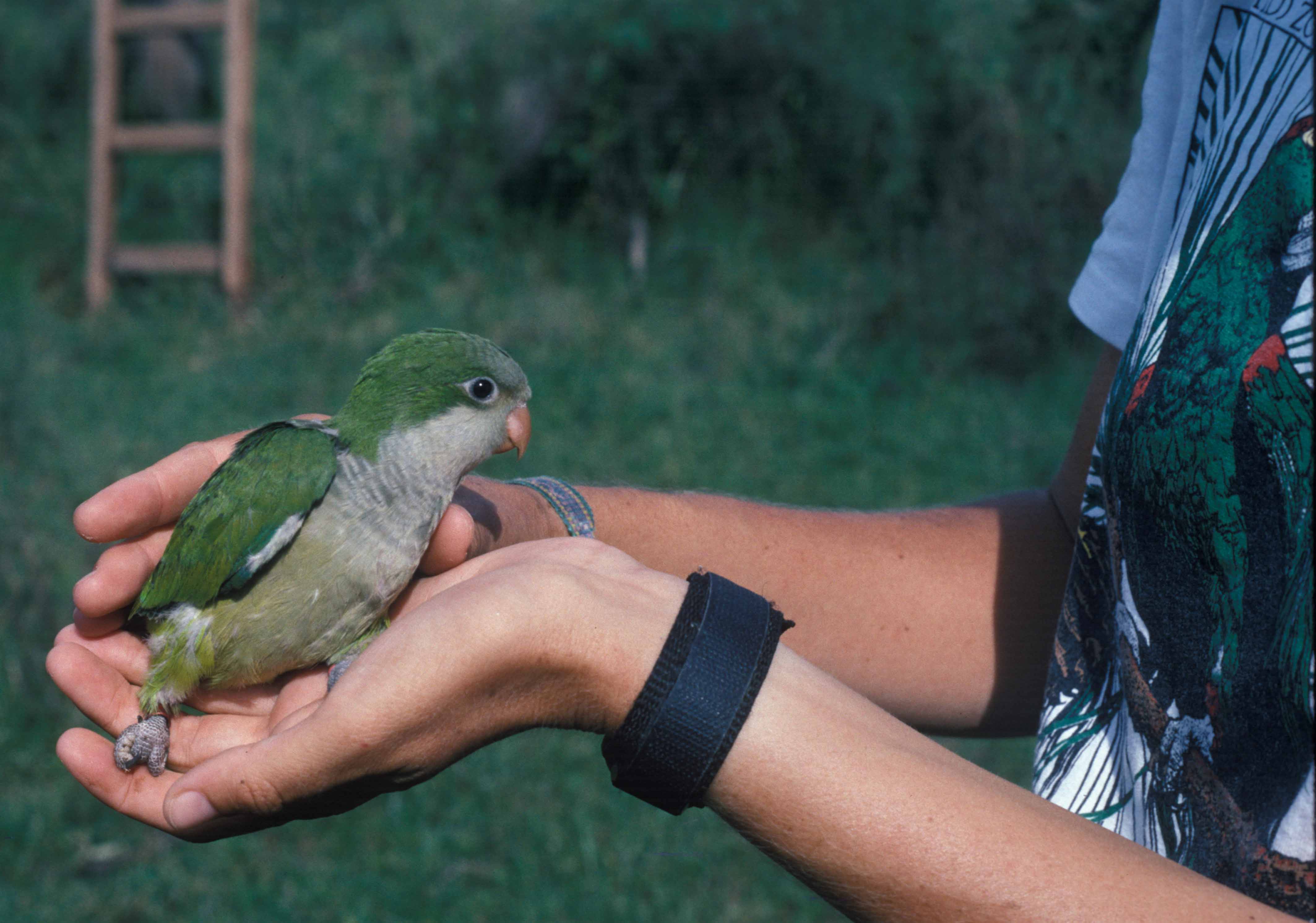 Even though most of my current research has a plant-ecology focus, I have an abiding interest in behavioral ecology.  Natural history has aroused my curiosity and sense of wonder for as long as I can remember, but as an undergraduate I was especially intrigued by animal behavior.  For example, I was a field assistant to Bill Franklin and Warren Johnson (who were then professor and Ph.D. student, respectively, at Iowa State University) in Torres del Paine National Park, Chile – where I helped study the foraging and social behavior, as well as inter-specific interactions, of some of the park's carnivores (puma [Puma concolor]; two species of fox [Lycalopex culpaeus; L. griseus]; Geoffroy's cat [Leopardus geoffroyi]; and Patagonian hog-nosed skunk [Conepatus humboldtii]).  I also completed a 7-month investigation of sex-biased juvenile dispersal in guanacos (Lama guanicoe).  Then, just before graduate school, I was a field assistant to Gordon Orians and Les Beletsky (who were then professor and post-doc, respectively, at the University of Washington) on a long-term study of the courtship, mating, nesting, and parental behavior of three species of New World blackbirds (red-winged blackbird [Agelaius phoeniceus]; Brewer's blackbird [Euphagus cyanocephalus]; and yellow-headed blackbird [Xanthocephalus xanthocephalus]) in eastern Washington (Harms et al. 1991).

Considerably more recently, Adriana Bravo's experiments and observations at the Los Amigos Biological Station in lowland Peru supported our hypothesis that frugivorous stenodermatine bats (a subfamily of New World leaf-nosed bats) visit collpas (clay licks) to obtain sodium that is otherwise in short supply in their diets (Bravo et al. 2008, 2010a, 2010b, 2012).  Adriana's project expanded into an investigation of the biogeography of sodium availability in the Neotropics (Bravo & Harms 2017).

Sandra Galeano's experiments and observations in the Bocas del Toro Archipelago, Republic of Panama supported our prediction that males from aposematic, brightly-colored populations of the highly polymorphic / polytypic frog, Oophaga pumilio, would be more aggressive toward both conspecific and heterospecific males than would be individuals from cryptic populations (Galeano & Harms 2016).  Sandra's project helps link the evolution of behavioral and morphological traits in O. pumilio via natural and sexual selection to their community-level contexts and consequences.

I am grateful to the students, post-docs, professors, and other friends who have helped me nurture a wide range of interests!