Genomic DNA in both prokaryotes and eukaryotes is compacted to fit into cellular compartments. We are interested in architectural proteins, so named because their primary function is to induce a specific DNA topology and control DNA compaction. Such proteins include the eukaryotic High Mobility Group (HMGB) proteins.

Architectural DNA-binding proteins play important roles in controlling processes such as DNA repair and gene expression. In eukaryotes, failure to regulate gene expression and DNA repair correctly may lead to mutagenesis, genomic instability, and cancer. Delineating these processes in bacteria is needed to understand how they respond to environmental changes, such as those associated with infection of a mammalian or plant host. 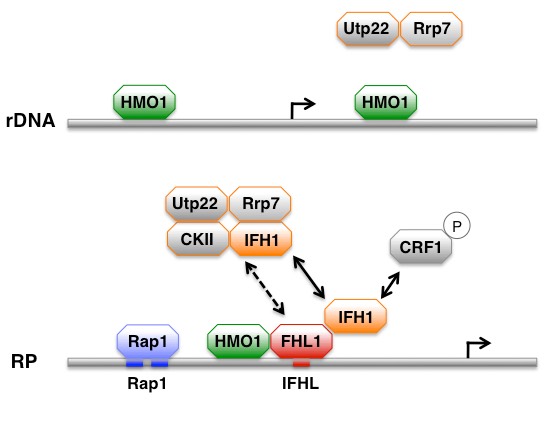 We are also interested in the functional roles of High Mobility Group (HMGB) proteins in yeast, Saccharomyces cerevisiae. HMGB proteins are generally known for their nuclear functions, altering chromatin structure and regulating DNA-dependent activities. We have focused on the HMGB homologs HMO1/2, which more closely resemble mammalian HMGB homologs by having two HMG-box domains. We have shown that both HMG-boxes, box A and box B, of HMO1 participate in DNA binding, and that the lysine-rich C-terminal domain of HMO1 is required for in-phase DNA bending (Xiao et al., 2010).

We have discovered that HMO1 is important for stabilizing chromatin. Its deletion creates a more dynamic chromatin environment in which remodeling events associated with repair of DNA double strand breaks occur more rapidly (Panday et al., 2015). In this capacity, HMO1 appears to function more like the mammalian li nker histone H1, which stabilizes chromatin in a process that requires its lysine-rich C-terminus; while deletion of HMO1 (or deletion of its basic C-terminal extension) renders chromatin more sensitive to nuclease digestion, expression of human H1 in yeast deleted for HMO1 restores chromatin resistance to nuclease, and rates of chromatin remodeling events preceding DNA double strand break repair are also restored to wild-type levels (Panday & Grove, 2016).

Current goals pertain to the mechanism by which HMO1 stabilizes nucleosomal arrays and the role of HMO1 in DNA repair and regulation of gene activity. Of specific interest is the role of HMO1 in coordinating gene activity in response to signaling by the Target of Rapamycin (TOR) kinase pathway (Xiao et al., 2011). In keeping with HMO1 being closely linked to mTORC1 activity, we recently discovered that TOR kinase binds directly to the HMO1 gene (Panday et al., 2017). For review see Xiao & Grove, 2009; Panday & Grove, 2017; Grove, 2017.

When a bacterial pathogen infects a host, a tug-of-war ensues in which the host aims to defend itself against the pathogen; the bacterium in turn responds to the new environmental cues, often subverting host defenses by utilizing host-derived signals to trigger upregulation of virulence genes. We are focusing on bacterial transcription factors that respond to such host-derived signals to control expression of virulence genes.

A major focus is on a group of transcriptional regulators designated MarR (Multiple Antibiotic Resistance Regulator) and the mechanism by which the binding of ligands controls their ability to regulate gene expression. Understanding mechanisms by which bacterial pathogens change gene expression programs in response to the environmental cues associated with host infection is critical for development of interventions required to combat bacterial infections. 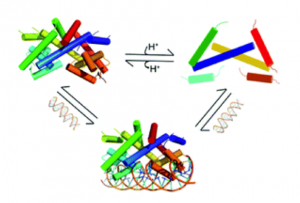 HucR. MarR proteins are transcriptional regulators that control gene activity in response to stimuli such as ligand binding or cysteine oxidation (for review, see Deochand & Grove, 2017). We have characterized a MarR subfamily named UrtR for urate-responsive transcriptional regulator. The founding member of this family is D. radiodurans HucR, which responds to urate by attenuated DNA binding in vitro and upregulation of uricase gene expression in vivo. The significance of this intricate control of uricase expression is that urate is an efficient scavenger of ROS, thus maintaining optimal urate levels may contribute to the oxidative stress resistance that is characteristic of D. radiodurans. We have also discovered that HucR is very pH-sensitive, forming a molten globule state at pH~5 due to protonation of specific histidine residues at the dimer interface; since DNA binding is abrogated at pH~5, the implication of this observation is the potential for using HucR as a pH sensor in synthetic network devices (Deochand et al., 2016a).

PecS. We have identified the residues involved in coordinating urate in HucR (Perera et al., 2009). Notably, a group of MarR homologs conserve these residues; this subfamily includes PecS proteins, transcription factors involved in regulating expression of virulence genes in certain plant pathogens (Perera & Grove, 2011). We have shown that repression of gene expression by PecS from Agrobacterium tumefaciens (A. fabrum), which causes crown gall tumors in a variety of host plants, Pectobacterium atrosepticum, which infects potato, the soil bacterium Streptomyces coelicolor, and Vibrio vulnificus, which is best known for causing gastrointestinal distress after eating raw oysters, is relieved in presence of urate (Perera & Grove, 2010; Huang et al., 2013; Deochand et al., 2016b; Bhattacharyya et al., 2019). In A. fabrum, urate levels remain low even under stress conditions, suggesting that it is urate produced by the host that functions as an inducing ligand (Sivapragasam et al., 2017). A current goal is to identify the PecS regulon. 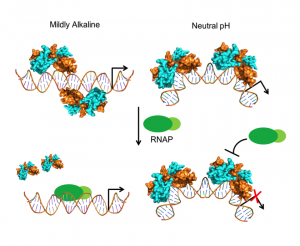 We are also investigating other signals that may alter PecS interaction with DNA and thereby its ability to control virulence gene expression. For example, the plant pathogen Pectobacterium atrosepticum, which causes soft rot in potato, colonizes the plant apoplast where it encounters a mildly acidic environment. Since enzymes involved in degradation of plant tissues operate at an optimal pH~8, the bacteria produce compounds that raise the pH. We have reported a novel mode of gene regulation in which P. atrosepticum PecS induces significant distortion of promoter DNA only at neutral pH, the pH at which the pecS promoter is repressed in vivo . At pH~8, DNA distortions are attenuated and PecS no longer represses the pecS promoter. This mode of gene regulation may lead to differential expression of the PecS regulon in response to alkalinization of the plant apoplast ( Deochand et al., 2016b). 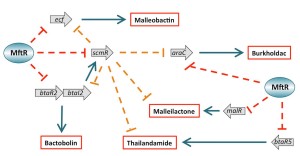 MftR . MftR proteins constitute another group of urate-responsive transcription factors. MftR is for example encoded by Burkholderia species, some of which are serious human pathogens. Based on analysis of MftR, we have reported that residues that are invariable among UrtR homologs are conserved for structural reasons (Gupta & Grove, 2014). We have used RNA-seq to identify the MftR regulon in B. thailandensis . Notably, MftR acts as a global repressor of biosynthetic gene clusters encoding proteins responsible for synthesis of secondary metabolites, many of which improve bacterial fitness and have pharmaceutical importance. Since such gene clusters are typically silenced under laboratory conditions, this observation paves the way for identification of novel therapeutic leads (Gupta et al., 2017; Thapa & Grove, 2019). Notably, the antibiotic trimethoprim elicits the accumulation of xanthine, which is also a ligand for MftR. This in turn leads to de-repression of genes under MftR control, a consequence of which is increased virulence (Thapa & Grove, 2020). We are currently working on identifying direct MftR targets using ChIP-seq. 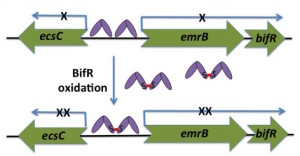 Responses to other host signals. Production of ROS is a common host defense that is elicited upon pathogen infection. By contrast, for bacteria that establish biofilm communities, oxygen may become limiting. Another active area of research focuses on MarR homologs that respond to changes in (reactive) oxygen levels to alter gene expression programs upon host infection. One example is B. thailandensis BifR, which is converted to a dimer-of-dimers "super-repressor" upon oxidation and controls biofilm formation (Gupta et al., 2017). B. thailandensis OhrR is oxidized most efficiently by organic hydroperoxides, one consequence of which is upregulation of the gene that encodes Ohr, the enzyme that inactivates the toxic hydroperoxides. However, even though organic hydroperoxides are toxic to the cell, the function of B. thailandensis OhrR is optimized such that levels of organic hydroperoxides do not get too low (Pande et al., 2018). We are pursuing the hypothesis that organic hydroperoxides are required to induce expression of other genes associated with survival in a host environment. We have also characterized B. thailandensis OstR, which controls expression of emrB, a gene encoding a multidrug efflux pump; OstR functions as a rheostat to optimize emrB expression in response to oxidants. Unexpectedly, deletion of emrB leads to increased resistance to certain antibiotics, a phenomenon we are currently investigating (Sabrin et al., 2019). For a review on MarR proteins from Burkholderia species, see Gupta et al., 2019.

Stringent response refers to the global change in gene expression that is elicited upon stress and starvation. It is dependent on the alarmone (p)ppGpp, which is produced from GTP and ATP. The stringent response may be induced when a pathogen enters a host environment in which nutrients are limiting and antibacterial agents are produced. Since (p)ppGpp is important for regulation of virulence genes, understanding requirements for its synthesis is critical. 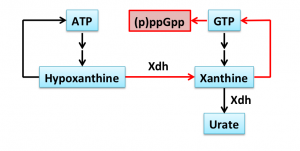 We have shown that (p)ppGpp is a ligand for the transcription factor XdhR in both S. coelicolor and A. fabrum . XdhR represses expression of genes encoding the enzyme xanthine dehydrogenase (Xdh), and (p)ppGpp binding to XdhR relieves this repression (Sivapragasam & Grove, 2016; Sivapragasam et al., 2017; for review see Sivapragasam & Grove, 2019). Since Xdh converts hypoxanthine to xanthine, it biases purine salvage pathways towards production of GTP. The significance of our observation is that (p)ppGpp is involved in sustaining the GTP levels required for its own synthesis. We are currently pursuing the mechanism by which XdhR controls gene expression as well as how general this regulatory mechanism is among bacterial species.