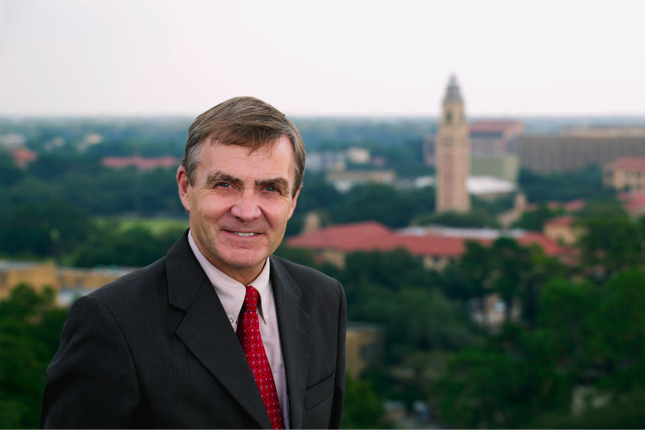 Kevin M. Smith was born in Birmingham, England. He is currently the LSU Foundation James C. Bolton Distinguished Professor and Professor of Chemistry at Louisiana State University. He received his B.Sc., Ph.D. and D.Sc. degrees from the University of Liverpool in the UK, and was a post-doctoral fellow at Harvard University from 1967 through 1969, working with Robert B. Woodward on the total synthesis of vitamin B12. From 1969 through 1977 he was a lecturer at the University of Liverpool, and then moved to a full professorship in the University of California, Davis (1977-2001). Dr. Smith served as Chair of the Department of Chemistry at UC Davis from 1990 to 1994, and then as campus-wide Vice Chancellor for Research from 1996 through 2001. In 2001 he moved to Louisiana State University to take up his current academic positions, as well as the administrative positions of Vice Chancellor for Research and Graduate Studies, and Dean of the Graduate School. Dr. Smith has received prestigious national awards on two continents – the Corday-Morgan Medal and Prize from the Royal Society of Chemistry, UK (1976), and the Alfred Bader Award in Bioorganic or Bioinorganic Chemistry from the American Chemical Society (2009). He was also the recipient of the Robert B. Woodward Career Award in Porphyrin Chemistry from the Society of Porphyrins and Phthalocyanines at ICPP-4 (Rome, Italy, 2006) and is a Fellow of the American Association for the Advancement of Science. In 1992 he was a Japan Society for the Promotion of Science (JSPS) Senior Scholar (in Kyoto). KMS has mentored over 110 graduate students and 50 post-doctoral fellows in his chemistry laboratories at Liverpool, UC Davis and LSU.