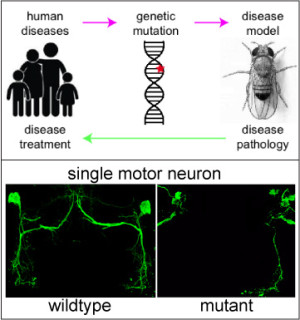 Age-related degenerative diseases, such as ALS, Alzheimer’s and Parkinson’s disease, are becoming more prevalent as the average life expectancy continues to rise. The lack of disease-modifying treatments that alter the course of the disease to stop or reverse its advancement is in large part due to our lack of knowledge about the molecular disease pathology. Given the ease of genetic manipulation and the amenability to biochemical assays and live-cell imaging, Drosophila has emerged as a powerful model system to study disease mechanisms. With the advent of CRISPR technology, it is now even easier to manipulate the endogenous genome in a highly specific manner allowing rapid generation of disease models that genetically mimic the human disease. We are harnessing the power of CRISPR to introduce human disease mutations into the endogenous fruit fly genome and study the disease pathogenesis on a molecular, cellular and organismal level. In the long term, we hope these studies will lead to disease-modifying treatments for a broad spectrum of degenerative diseases.

Function and regulation of tubular lysosomes

An early hallmark of most degenerative diseases is an accumulation of protein aggregates and damaged organelles, implying thatproteostasis defects are an underlying molecular cause of degeneration. The predominant cellular degradation sites for clearing damaged proteins and organelles are lysosomes and, not surprisingly, lysosome dysfunction is linked to a broad spectrum of degenerative diseases. Lysosomes are classically thought to be vesicular organelles, where they serve as depots for cargo delivered via endosomes or autophagosomes. In recent years, it has become appreciated that lysosomes are not rigid organelles, but are highly plastic with the ability to change their shape, size and molecular components in response to varying cellular environments. We have identified a unique class of tubular lysosomes in muscles and certain sub-types of glia, two cell types in which autophagy demand is constantly high (see image and video below). We hypothesize that inducing tubular lysosomes increases lysosome plasticity, enhancing their degradation capacity and allowing them to degrade complex cargo more efficiently. Our goal is to characterize these “super lysosomes” to understand how they function in their natural cellular environments and identify ways to exploit their unique properties to combat neurodegenerative diseases.

Harnessing the restorative effects of sleep

Many neurodegenerative diseases are coupled with severe disruptions in circadian sleep rhythms. Whether sleep disruption is a cause or effect of the disease remains unknown, but evidence from animal models of Alzheimer’s disease (AD) suggest that modulating sleep has a direct impact on the disease progression. Moreover, chronic sleep loss in healthy individuals correlates with decreased physiological performance and neurodegeneration. Thus, harnessing the natural restorative effects of sleep could provide new therapeutic avenues to combat neurodegenerative and other age-related diseases. A major goal in the lab is to identify the heath-promoting signaling pathways triggered by sleep, such that we can co-opt these mechanisms in other biological contexts.