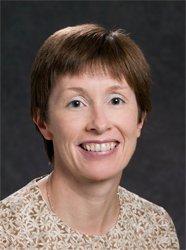 Carol Taylor received her BSc in 1987, and her MSc in 1988 from the University of Auckland, New Zealand. She received her PhD in 1993 from the University of Pennsylvania (USA) under the direction of Professor Ralph Hirschmann and Professor Amos B. Smith, III. From 1993 to 1994, Carol was a Research Associate at Princeton University (NJ, USA) with Professor Dan Kahne. In 1995, she returned to New Zealand to the position of Lecturer at the University of Auckland where she was awarded continuation of appointment in 1998 and promoted to Senior Lecturer in 1999. In April 2000, she moved to Massey University in Palmerston North, New Zealand. In 2001, she received the RSC/NZIC Easterfield Award for original contributions by a New Zealand chemist under the age of 35 and was promoted to Associate Professor in 2003. In July 2006, she returned to the USA as an Associate Professor at Louisiana State University in Baton Rouge and was promoted to Full Professor in 2012. Her research program is primarily engaged with the chemical synthesis and physical characterization of novel peptide motifs that arise via post-translational modifications. She served as Department Chair from 2015-18 and Interim Associate Dean for Research & Administration in the College of Science for six months in 2019.

All projects in our group are focused around the chemical synthesis of architecturally interesting molecules that have biological and/or medicinal significance. Our group is engaged in mainstream, modern organic synthesis, with an emphasis on peptides and glycopeptides. Target molecules typically contain peptide/protein motifs that arise from post-translational modifications (PTMs) or non-ribosomal peptide synthesis (NRPS). Our major area of research to-date has been the synthesis and incorporation of hydroxylated prolines into peptides. Using NMR, we have studied the effect of proline hydroxylation on peptide conformation. We have synthesized the repeating decapeptide (Fig. 1) of an adhesive protein produced by Mytilus edulis. In concert with a family of related proteins, Mefp1 mediates adhesion of mussels to rocks in turbulent waters. 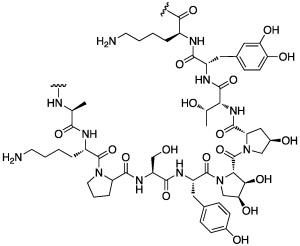 Virotoxins are cyclic heptapeptides that were isolated from Amanita virosa (Fig. 2) in the 1980s by Wieland and co-workers. These compounds have comparable toxicity to the notorious phalloidins; one bite of the Amanita phalloides mushroom can kill an adult. We are engaged in a total synthesis of viroidin and seek to determine the role of the dihydroxyproline residue in assuring the bioactive conformation that binds to F-actin.

Our interest in hydroxyprolines has extended, in recent years, to glycosylated residues. Hydroxyproline glycosides have been well-known in plants for many years. To-date, no examples have been isolated from mammalian sources. Two glycopeptides targets are under study in our laboratory. Skp1 is a mediator of ubiquitination. In the slime moldDictyostelium, the protein is a target of proline hydroxylation and subsequent glycosylation (Fig. 3). These post-translational modifications are vital to the life cycle of the organism. Moreover, hydroxylation and glycosylation of Skp1 appear to be more general phenomena in lower eukaryotes, including Toxoplasma gondii, the causative agent of toxoplasmosis. We are working in collaboration with West (University of Oklahoma Health Sciences Center) to develop probes and inhibitors for key enzymes in the post-translational processing. 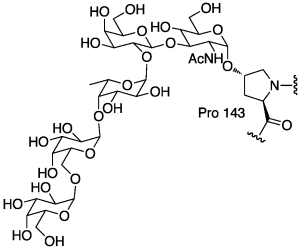 β-Arabinosylated hydroxyprolines have been identified in the proline-rich domain of Art v 1, the major allergen of mugwort (Artemesa vulgaris). This epitope appears to be important in the allergic reaction. We are working to synthesize the β-L-Ara-Hyp motif to study, in collaboration with Altmann (BOKU, Vienna), the minimal requirement for recognition of the allergen. 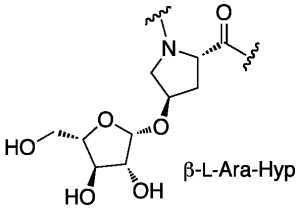 Theonellamides are structurally novel bicyclic peptides, characterized by a bridging histidinoalanine (HAL) residue. Histidinoalanine has been isolated from a range of sources: phosphoproteins of bivalve mollusks, milk products that have been heat-treated and human tissues (e.g., eye cataracts). The theonellamides are the first example of HAL in a small, well-defined molecule. Theopalauamide, a glycosylated analog, has nanomolar antifungal activity and has been shown to disrupt fungal cell membranes by binding to ergosterol. We are working toward a total synthesis of theonellamide C (Fig. 5). 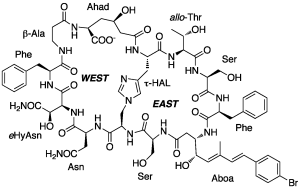