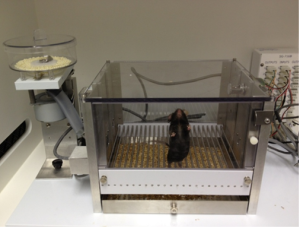 The aims of this project are to: 1) Determine the profile of age-related changes in short-term working memory in APPswe/PS1dE9 mice (a transgenic mouse model of beta amyloidosis); and 2) Determine the profile of age-related changes in attention in APPswe/PS1dE9 mice. The research is significant because it is expected to advance the development of pharmacotherapeutics for AD-associated cognitive impairment by providing a clinically relevant, laboratory-based, performance baseline against which therapeutic efficacy can be evaluated. Ultimately, such knowledge has the potential to improve quality of life for AD patients and reduce the costs associated with their care.

Second generation antipsychotics (SGAs) are commonly prescribed to children and adolescents for a variety of diagnoses, including non-FDA-approved diagnoses. SGA medications can produce rapid and large gains in weight along with metabolic dysfunction, thereby increasing patient risk for developing diabetes, heart disease, and other problems. Additionally, SGA treatment is associated with increased consumption and preference for foods high in fat and sugar, potentially contributing to the negative side effects on health. Further, SGA treatment is associated with changes in the brain involving the dopamine neurotransmitter system during and shortly after treatment and early-life exposure to SGAs appears to produce permanent alterations in brain development in non-human animal models. The long-term impact of early-life exposure to SGA medications is not fully known. The purpose of these studies is to evaluate the short- and long-term effects on weight, metabolic function, and cognition/behavior of early-life exposure to SGA medications in mice to inform clinical decision-making regarding the potential long-term risks.