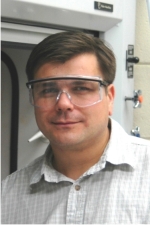 The development of functional organic materials is a rapidly growing area of science, which promises to replace traditionally used materials with cheaper and better-performing new ones, and often brings about new applications that humankind never considered before. The "bottom-up" approach which is being pursued in the Nesterov group starts from a thorough design of a molecule possessing a desired property, and then converting this molecule into a bulk material or device. Many of our materials are designed to be controlled by light. Such materials may find use in nanoscale electronics, photonics, molecular computing, sensors, biological imaging and in a variety of other fields. This multidisciplinary research program combines contemporary and traditional areas of physical organic and synthetic organic chemistry, theoretical and computational chemistry, biochemistry, and macromolecular chemistry. Some of the current projects are outlined below. Additional projects, not mentioned here, include design of new switchable contrast agents for MRI, near-infrared fluorescent biolabels, etc.

Conjugated polymers represent a unique class of organic materials which can be easily tuned or modified for a desired application. Such materials may find applications ranging from chemo- and biosensing devices to light-emitting diodes and lasers with tunable emission color. Using living polymerization strategies recently developed in our group, we succeeded in preparation of a series of amphiphilic block copolymers like the one shown in the Figure above. This polymer incorporates red-fluorescent central unit with two green-fluorescent conjugated polymers chains attached to it. This design brings about the possibility to control emission color of the polymer by external stimuli (such as temperature or solvent). In another project, we design novel molecularly imprinted fluorescent conjugated polymer (MICP) materials. These materials can be used as sensitive and selective fluorescent chemosensors that can be "pre-programmed" for the detection of almost any target analyte of interest (Figure below). 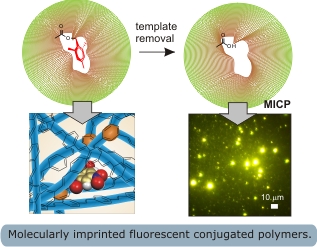 In a quest to develop a universal approach to thin-film ratiometric fluorescent chemosensors, we investigate a general phenomenon of controlling photoexcitation energy migration in end-capped π-electron conjugated systems by analyte binding (Figure below). When a target analyte binds to the receptor connected to the end of the rigid conjugated system, it perturbs the HOMO-LUMO gap of the receptor, which results in alteration of the energy transfer and causes redistribution of the intensities of the two emission bands (ratiometric, color-changing effect). This phenomenon, operating at the molecular level, can be used to make thin-film macroscopic sensors by covalent immobilization of these sensor molecules on a solid surface to form a monolayer. By choosing appropriate receptors for the analytes of interest, a wide variety of color-changing sensors can be prepared. The example shown in the Figure below is a thin-film sensor for amino acid cysteine – an important bioanalytical target to monitor. 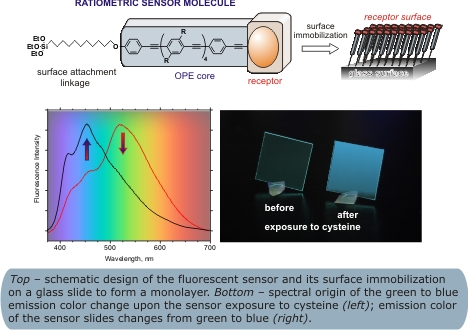 A powerful methodology based on morphology control of organic thin films is being studied to be used in organic electronic devices. The ultimate goal of this project is to develop a modular, "bottom-up" strategy to surface-immobilized nanostructured semiconducting polymer thin-film materials with hierarchically controlled molecular organization. This strategy includes a combination of nanosphere lithographic patterning with surface-initiated in situpolymerization through simple and efficient chemistries (such as metal-catalyzed living polymerization and other chemical routes which are being currently developed in the lab). As shown in the Figure below, the strategy produces nanostructures of semiconducting polymers which can be further used to prepare efficient and durable solar cells. 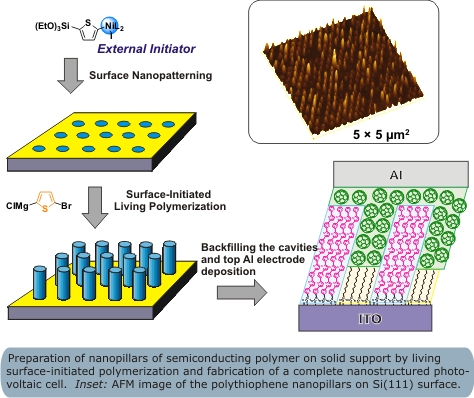